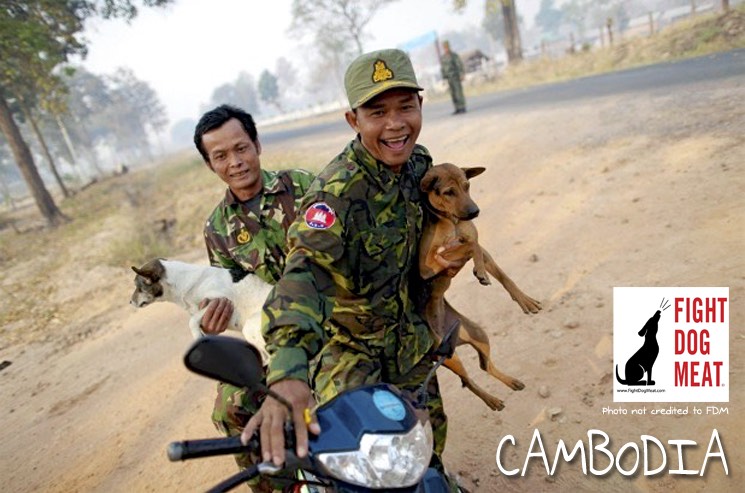 A few years back Cambodians living in the capital city Phnom Penh, were urged to eat more dogs as part of a crackdown on stray dogs wandering around the tourist city. It was inferred that eating dog meat is a civil duty to help keep the city clean and tidy.

Cambodian people in the rural outskirts were said to be eating their “quota” of dogs, but city folk were letting the team down. The governor at the time, Kep Chuktema wanted to open a government run dog market, for dog meat, so “poor people can continue enjoying dog meat, served palm juice wine.”

He was infuriated at the suggestion of banning dog meat! He said it would “hurt the city” and how could anyone ban something “so delicious.” He also acknowledged how much “the Viet­nam­ese and Koreans love to eat dog meat.” China, followed by South Korea and then Vietnam are Cambodia’s number three top tourists – all of them are predominately dog and cat eating countries.

Heroes For Dogs and Cats In Cambodia

Fight Dog Meat: back in April 2015, I organized and hosted a successful global march to end the dog and cat meat trade, in 21 countries and over 50+ locations. Animal lovers in Phnom Penh, Cambodia also took part.

The event was very successful – except in Cambodia, where animal lovers, including many women and small children, all with dogs on leashes, were met with armed police in riot gear and rifles! At gun point they were told they would be arrested and their dogs confiscated – for dog meat. At that the same time, two trucks arrived – one for the people and one to take all their pet dogs away!

A Cambodian police officer told a woman with a little girl that he would kick her dog in the stomach and kick it to death, and the little girl began screaming in terror. All hell broke out as children and mothers began crying and pleading for their dogs. They knew that if their dogs were removed, they would never get them back again – they would be sold to dog butchers for dog meat.

After pleading and begging, at gun point the groups of distraught animal lovers were forced into the middle of a busy road and made to walk down the center of the road, dodging heavy traffic. It was the most disgusting display of force against innocent people, from their own country!

Fortunately a number of media journalists were present and they published the events. Cambodian officials told local media that having dogs in leashes was “strange.”A lot of tears were shed that night. I was horrified and saddened for my friends in Cambodia who were clearly traumatized.

But the following day when the media articles were published, local animal lovers were instantly vindicated and transformed into heroes! Strangers stopped them in the street and congratulated them, and some even bought them dinner. Each one of the  was a hero for dogs and cats in Cambodia!

Next year, 2017 – Fight Dog Meat will be holding a worldwide GLOBAL MARCH – even bigger this time around. Make sure to keep an eye out for ways you can take part and help create history. Details coming soon.

DONATIONS: Fight Dog Meat does NOT accept donations.
WE HIGHLY RECOMMEND the Vietnam Animal Aid And Rescue (VAAR), formerly known as VAWO, who save dog meat dogs and cats and run a Vet Training School to teach local vets and trainees, humane practice on pets within Vietnam. Many local Vietnamese vets do NOT USE ANESTHETIC ON DOGS OR CATS DURING OPEN SURGERY! VAAR urgently need financial help!
VAAR’s Direct Paypal: cat.besch@gmail.com

One thought on “Cambodia: Local Heroes Stand Up For Dog Meat Dogs and Cats”