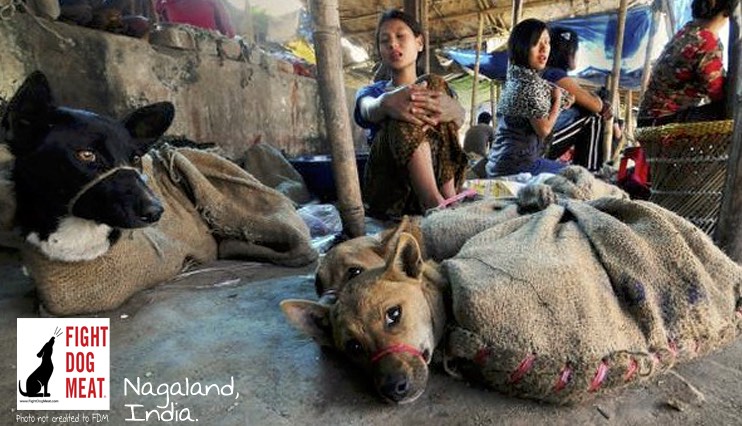 In a lesser known part of India, called Nagaland, live dogs are sold as “bush meat” at local markets. The dog’s are hog tied and their mouth bound tightly shut, before being crammed into hessian bags which are tied tightly around their throat, with just their head sticking out. The market also sells civet cats, snakes, pigs, cats, deer, frogs and so on.

It is illegal to kill dogs in India, but the dog meat dogs are left like this for days, in the oppressive heat, until sold. They can’t pant to cool their body temperature down and have no access to water or food. Because India has the highest number of reported rabies deaths in the world, many private residents breed their own dog meat dogs, for their own consumption.

An estimated 31,000 ‘reported’ human deaths occur each year from rabies in Asia and around 20,000 of them are in India, which gives India the highest “reported” rabies death rate in the world, according to the World Health Organization. Most of these deaths are from contact with stray dogs.

Because massive numbers of Vulture birds have been poisoned, dead animal carcasses are not being eaten and cleared away, which means feral dogs are breeding rapidly because they have food to survive, which in turn means rabies has a bigger pool of carriers. Therefore in 2001 a law was passed that forbids killing dogs. Most rabies deaths in India are children who have been infected by rabid dogs.

Rabies can be controlled better if at least 70% of all dogs, including stray dogs, are vaccinated. Estimates vary but some put the Indian dog population as high as 25 million. This is a vaccination logistical nightmare.

Experts agree that since India shares borders with six countries that are all rabies endemic, it is essential that India’s rabies control efforts are coordinated regionally. It is currently broken into four different zones. When travelling, vaccination information for India is imperative.

DONATIONS: Fight Dog Meat does NOT accept donations.
WE HIGHLY RECOMMEND the wonderful animal rescue people at Vietnam Animal Welfare Organization (VAWO), who not only save animals, including dog meat dogs and cats, but also run a Veterinarian Training School to teach local vets how to humanely practice medicine on pets within Vietnam. It is custom that many local Vietnamese vets do NOT USE ANESTHETIC ON DOGS AND CATS DURING OPEN SURGERY!
VAWO urgently need financial help! if you are thinking of donating to an animal organization, I urge you to please consider these wonderful people. Receipts will be issued. Please take a look at their website: http://vnanimalwelfare.org/take-action/

Please note: shortly our own petitions will be provided with each article published.
(Photo not credited to Fight Dog Meat)
ALL RIGHTS RESERVED
PLEASE CREDIT THE ORGANIZATION WHEN SHARING