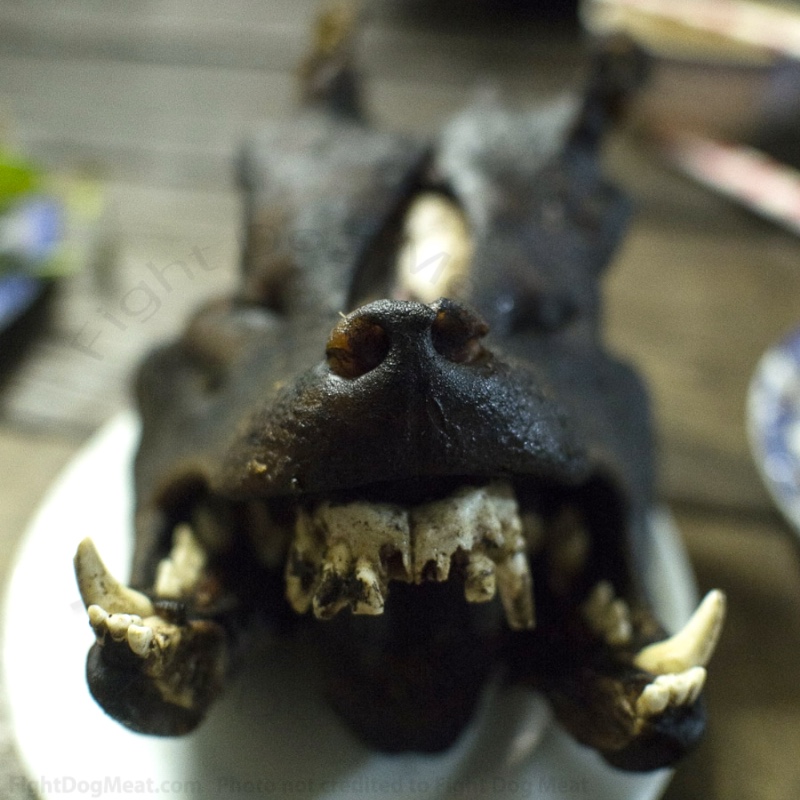 Down a dark alley in one of Phnom Penh’s least affluent suburbs thick, meaty smoke billows out from a long row of food joints. Beneath the corrugated tin roofs, men huddle around beer-soaked tables lit up by fluorescent lights. The choice is limited: a couple of salads and dips to go with the only source of protein – dog.

”We come here maybe twice a week” says one patron, feasting on some dog intestines and ribs with his friends. ”I like it a lot. It has a really sweet and delicious taste.”

Until recently, eating dog had never been a big thing in Cambodia in the way that it is in other East Asian countries like Vietnam, China and Korea. Now, however, more and more Cambodians appear to crave this controversial meat. 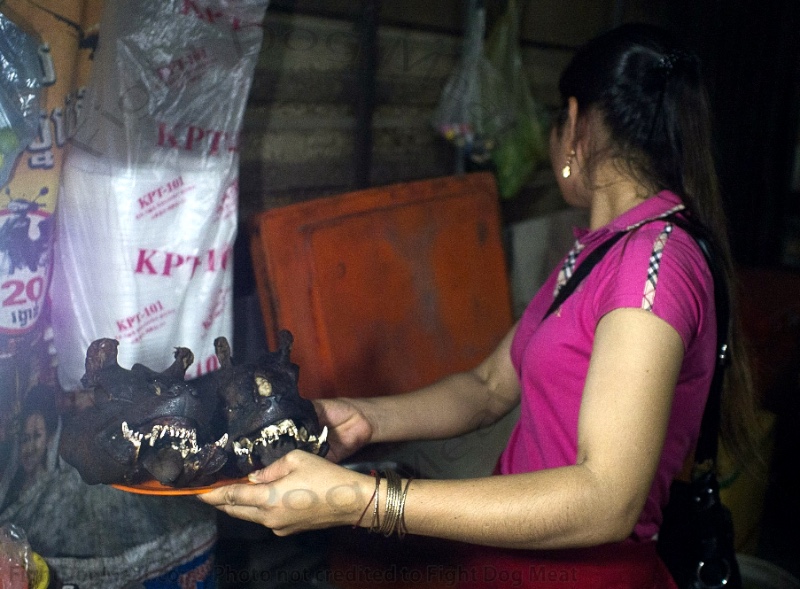 A woman working in a dog restaurant serves up two heads while hiding her face from the camera. Dog heads are the most prized part of the dog to eat. Photo by author.

”It’s become very popular, especially here in Phnom Penh” says Pheakadey, who owns one of the alley’s dog joints. ”It’s very delicious, and it also has some medicinal qualities. It’s good for the man’s virility.”

With a rising demand for dog meat, restauranteurs like Pheakadey have to rely on informal sources to supply the meat. Along with the Cambodian appetite for dogs, a black market of stolen pets and street dogs has emerged.

”We buy some of our dogs from the dog thieves” Pheakadey admits. ”Every day we have people bring us stolen dogs.”

In another part of town, Lucy Haurisa and her colleagues at the Cambodian Animals Protection Association provide shelter for around 100 dogs, including animals that have been rescued from the dog meat trade.

”This is a growing concern”, she tells me. ”I think one reason behind the increasing popularity is related to cultural traditions coming in from Vietnam, Korea and Laos where eating dog is more common.” 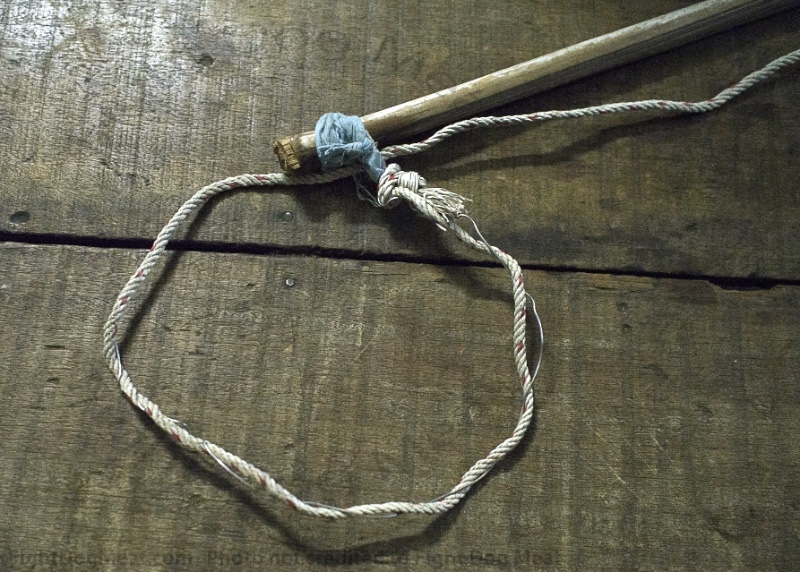 Dog thieves use simple and cruel methods for catching dogs. One such method is to get a snare around the neck of the dog and drag it behind a motorbike until it passes out or is choked to death.

People, like Lucy Haurisa, who care for animals are especially concerned by reports of an increasing number of dog thefts connected to the dog meat trade.

”Pets are regularly stolen”, she says. ”Pets are friendly, usually free from disease, they are quite easy to catch, so therefore they have become sought-after. Sometimes animals are lured from their homes over the gate with poisoned bait, other times they are caught with snares or nets.”

”You don’t have proper slaughterhouses. It’s basically backyard operations, run by people who are not skilled and do not know how to humanely kill an animal”, says Lucy Haurisa. The unregulated nature of the dog meat trade causes unnecessary suffering for the animals.

After a couple of phone calls, I manage to track down two dog thieves. Mr. Pheak and his partner-in-crime, Mr. Pek, invite me over for dinner. We sit down in a patchy couch, next to a stereo blasting Cambodian house music.

In the daytime, the men tell me, they drive sunburned backpackers around in tuk-tuks, which brings in somewhere around $7-9 a day. But at night—”if the opportunity presents itself”—they steal dogs.

Stealing and selling dogs is, for some, a way to earn quick cash. But it is not without risk. In Vietnam, since 2012, at least 20 dog thieves have been beaten to death by community members fed up with having their beloved pets stolen.

”The money I earn from driving tuk-tuk is not enough”, Pheak says. ”I have to give some of it to my wife, for my kids to go to school, for putting food on the table, and then there’s not much left for myself. We have a big family and I’m the one who is supposed to bring home the money.”

A healthy dog can sell for $30—three times what Pheak would earn for a long day of honest work.

”So if we should stumble upon a dog, and if the owner is not around, then, yeah, why not, we will catch it and make some money” Pheak says, looks at Pek, his friend of 10 years now, and they both laugh.

Their method for catching the animals is both cruel and primitive. They use a motorbike, and the one riding back holds the snare—a wooden pole with a lasso made of metal wire—and goes for the dog’s neck.

”Once we get the snare around the neck we just drive and drag the dog behind us for a couple of hundred meters, until it passes out”, says Pek. ”Sometimes it dies, and then we just bring the dead body to the shop and they will buy it.”

I ask if he doesn’t feel bad for making the dogs suffer.

”Yes, we pity the dog, but dog is becoming more and more popular as a meat for the people. It has become like chicken for us.” he says.

Dog owners themselves, I ask how they would feel if I snatched away their pets and ate them.

”I’d be really angry, for sure”, says Pheak. ”But being poor, we don’t think about stuff like that. We just do it.” 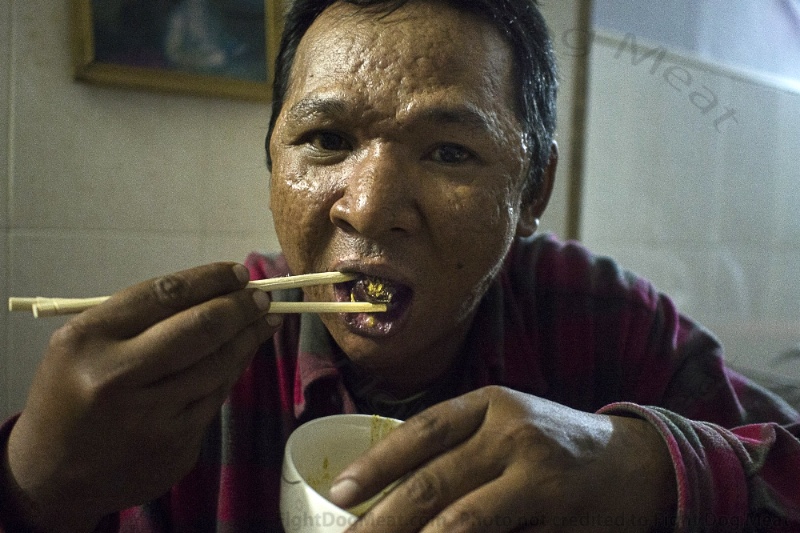 Despite steady economic growth since the mid-1990s, poverty is still wide-spread in Cambodia. According to the World Bank, the poverty rate has more than halved over the last decade. However, about half the population remains ”near poor”, living on less than $2.30 per day. Even the slightest dent in their income would plunge many back into poverty.

Stealing and selling dogs is, for some, a way to earn quick cash. But it is not without risk. In Vietnam, since 2012, at least 20 dog thieves have been beaten to death by community members fed up with having their beloved pets stolen.

Pheak and Pek have never been caught, but there has been a few close calls. 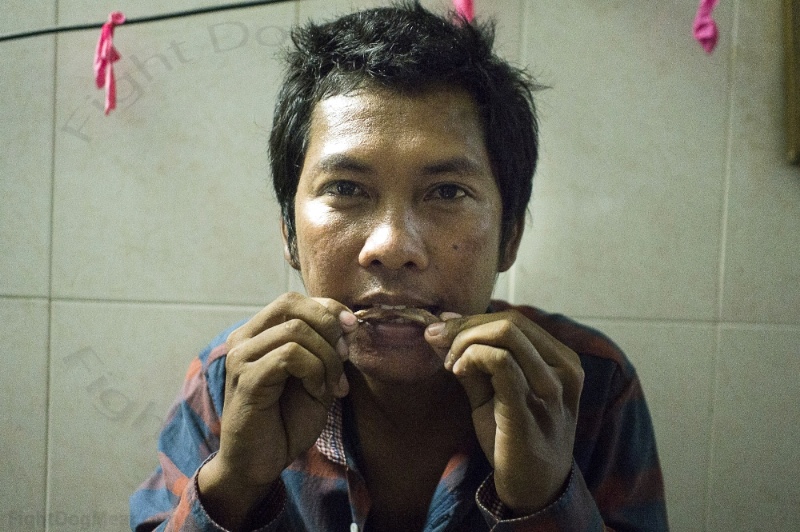 ”We’ve been lucky,” Pek says. ”Sometimes the dog owners or their neighbors have become aware of what we’re doing and we’ve had to run away.”

We break for food. The table has been set: a spread of ribs, intestines, chunks of meat and, last but not least, a grilled head unmistakably of a dog. Sides include a bean sprout and onion salad and some dips made with chili and lime juice.

Pek goes straight for the head, cuts off a chunk from the face just above the eye and passes it to me. With the dip, it’s not too bad. The meat is bland but very tender and has a slightly gamey taste, similar to wild boar. 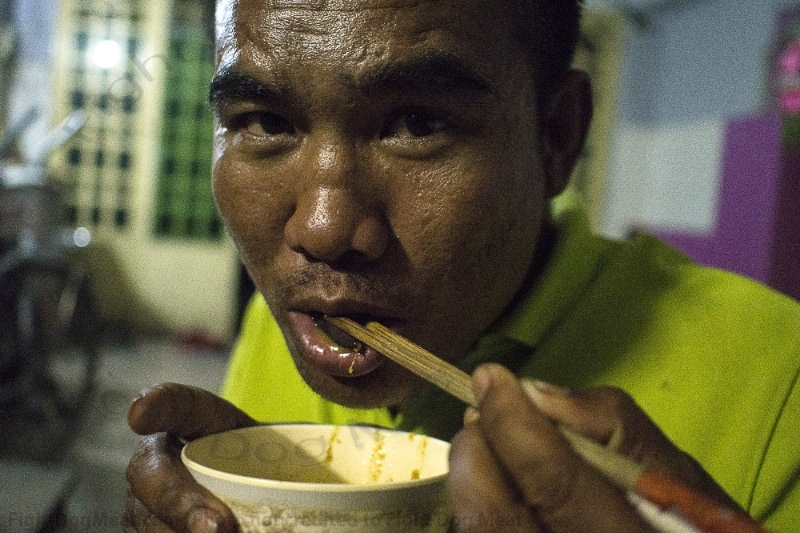 Professional Khmer boxer Pech Arun says he likes to eat two dogs before a fight, because of the protein.

We’re joined for dinner by Pheak and Pek’s friend, professional Khmer boxer Pech Arun, who is an avid dog diner.

”If I can, I’ll eat two dogs before a fight”, says Pech Arun and pops open a can of Angkor beer. ”It’s got so much protein, you become really strong by eating dog.”

I skip the unidentifiable intestines laid out and go for the dog ribs, which turn out to be delightful. Glazed in BBQ-sauce, sure, but surprisingly meaty and satisfying enough that you almost forget that you’re feasting on what could have been some family’s beloved pet, cruelly caught and killed for profit.

It also turns out—as the thieves open up after a few beers—that they don’t tell their families about all the money they earn. Apparently, dog snatching is about more than putting food on the table and paying for the kids’ school.

”We share it between us, and then we go for fun and drinking”, says Pheak.

”Sometimes”, he continues after a pause and a big smile, ”we can get three dogs in a night. That’s a lot of money. And then, when we go to the beer garden, we can ask the beautiful ladies to come and serve us and drink with us” (end of report by Axel Kronholm.)

FIGHT DOG MEAT: thank you Axel for such a comprehensive report on Cambodia’s dog meat trade. On April 5, 2016, Fight Dog meat is holding an Online Event: REMEMBER CAMBODIA. This event will take place on FaceBook, Twitter and Instagram, to remember the ordeal Cambodian animal lovers were forced to endure one year ago as they met to help raise awareness for Cambodia’s dogs and cats. I hope you will join us in bringing much needed attention to the plight of Cambodia’s animals.

DONATIONS: Fight Dog Meat does NOT accept donations.
WE HIGHLY RECOMMEND the Vietnam Animal Aid And Rescue (VAAR), formerly known as VAWO, who save dog meat dogs and cats and run a Vet Training School to teach local vets and trainees, humane practice on pets within Vietnam. Many local Vietnamese vets do NOT USE ANESTHETIC ON DOGS OR CATS DURING OPEN SURGERY! VAAR urgently need financial help!
VAAR’s Direct Paypal: cat.besch@gmail.com