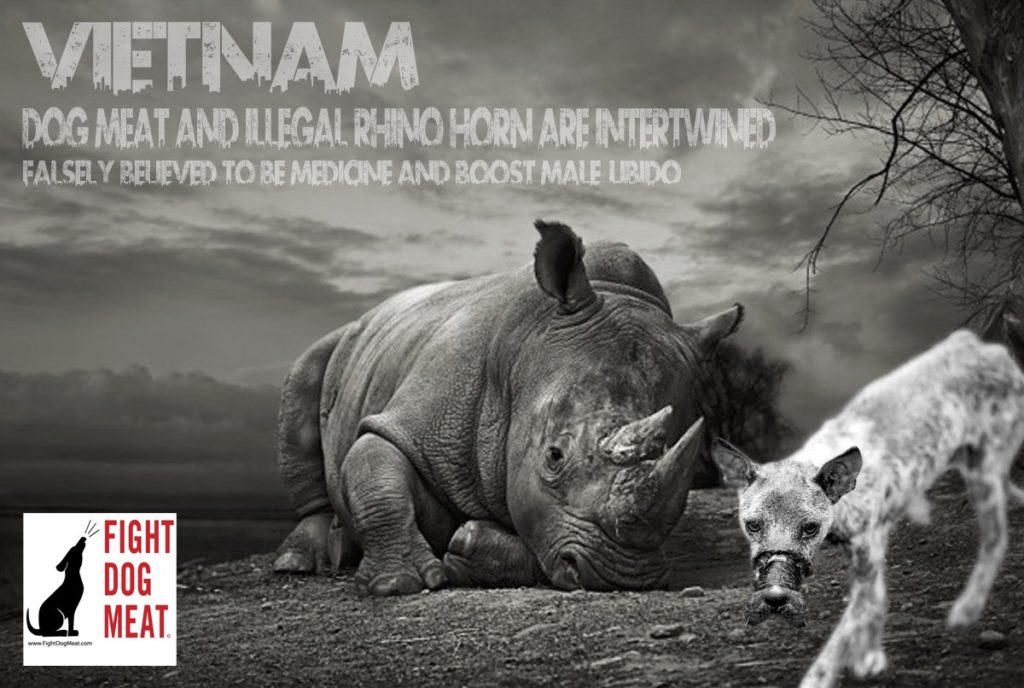 Vietnam is home to illegal rhino horn distribution and home to dog and cat meat. Rhino horn and dog meat are both used for identical purposes: false medicine and boosting male libido. Dogs and cats are tortured to death and rhinos are mercilessly hacked, leaving them to die a slow agonized death.

Consumers of dog and cat meat don’t care about animal welfare and neither do consumers of rhino horn. They don’t care about loss of rhino life or human life when rangers are killed by poachers, so appealing to their better nature is a waste of time. Rhino Rescue Project say the only way to stop them consuming the horn is to trigger health anxiety – the fear of ingesting contaminated horn.

Similarly, begging dog and cat eaters not to eat companion animals because they are “cute” is meaningless. One way to stop dog and cat meat consumers is to create health anxiety – fear of ingesting contaminated meat. 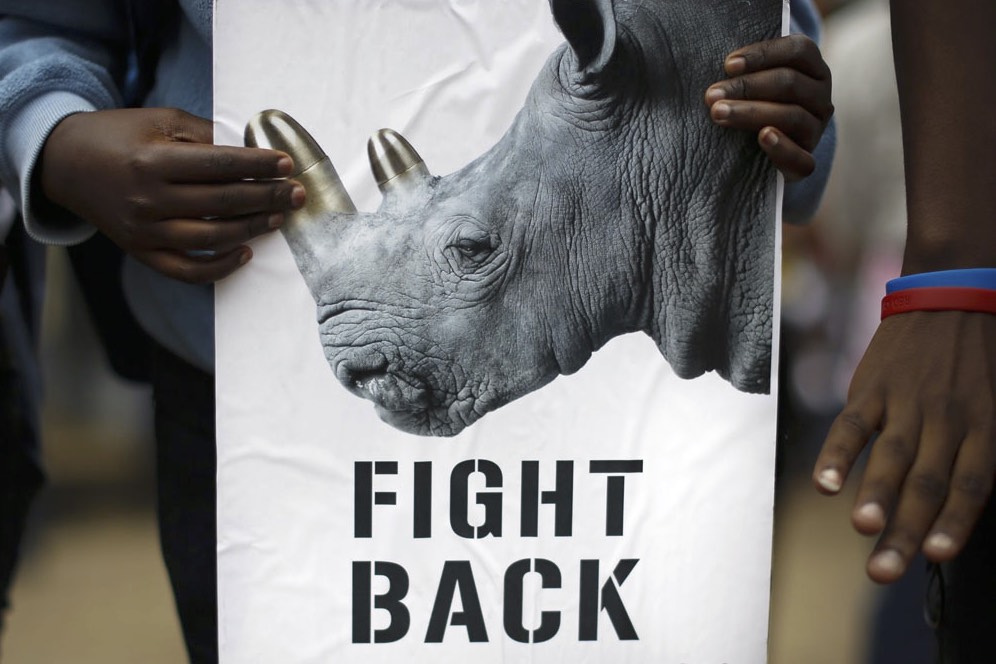 Trigger health anxiety by the possibility of ingesting contaminated horn or meat, and fight back.

Poaching is on the rise in Africa, driven by demand from Vietnam and China where rhino horn, used in traditional medicine, can sell for about $84,000 a kilogram, according to estimates by conservationists. About 1300 rhino were killed illegally in Africa last year, leaving African rhinos balancing on the brink of extinction.

Trade in rhino horn is illegal, and anyone who knowingly purchases and consumes rhino horn is involved in criminal activity, even if the use of rhino horn in some countries such as Vietnam and China is deemed culturally acceptable. It is still illegal.

“In Vietnam, rhino horn is the new status symbol. More expensive than cocaine and just as illegal. The growing newly rich believe consuming the horns can cure anything from hangovers to impotence. It doesn’t. This unprecedented demand was leaving rhinos butchered, dying in agony, and on the verge of total extinction. To help protect the species, we had to kill the rhino-horn trade itself, turning rhino horn from a priceless status symbol, into worthless poison.” says Rhino Rescue Project (RRP.)

RRP have pioneered a method to save rhinos by devaluing the rhino’s horn from the consumer’s perspective. Vietnam and China cannot get enough rhino horn and unless demand is drastically reduced, rhino populations will dive into rapid decline from 2016, with no way to protect the rhino.

A year ago Rhino Rescue Project were given the opportunity to perform their new horn treatment procedure live, via satellite for a group of 30 Vietnamese journalists. Please view the prestigious gold award winning APAC Effie Awards Gala 2016 video:

Rhino horn is made up of a tubular structure, which can be readily infused under high pressure. To devalue the horn, it is contaminated by infusing it with a compound made up of ectoparasiticides and indelible dye that renders it useless for ornamental or medicinal use, which takes around 10 to 15 minutes for the infusion to be completed.
The liquid stays in the horn for up to 10 days, ensuring that the liquid penetrates large areas of the internal horn structure and remains effective for approximately three to four years (a full horn growth cycle), then the horn needs to be re-infused again.
The products used are all eco-friendly and biodegradable, so there are no adverse effects on the environment. Only ox-pecker friendly and vulture safe products have been used. Ectoparasiticides are not intended for consumption by humans, and symptoms of accidental ingestion may include severe nausea, vomiting and convulsions (all dosage-dependent).

There is no risk to the animal from the procedure, only the normal risk associated with immobilization of large animals like rhinos. To date, losses of treated rhinos (to poaching or otherwise) total less than 2% of all animals treated.

The treatment administered to RRP’s rhinos is no joke. It is not a mock-up. It is as real as poaching and its consequences can be every bit as devastating. If individuals still proceed in the harvesting, sale, purchase and consumption of rhino horn, having been informed that it could potentially pose serious health risks, they do so at their peril, say RRP.

Rhinos have no other way of defending themselves against the greed and ruthlessness of humans. 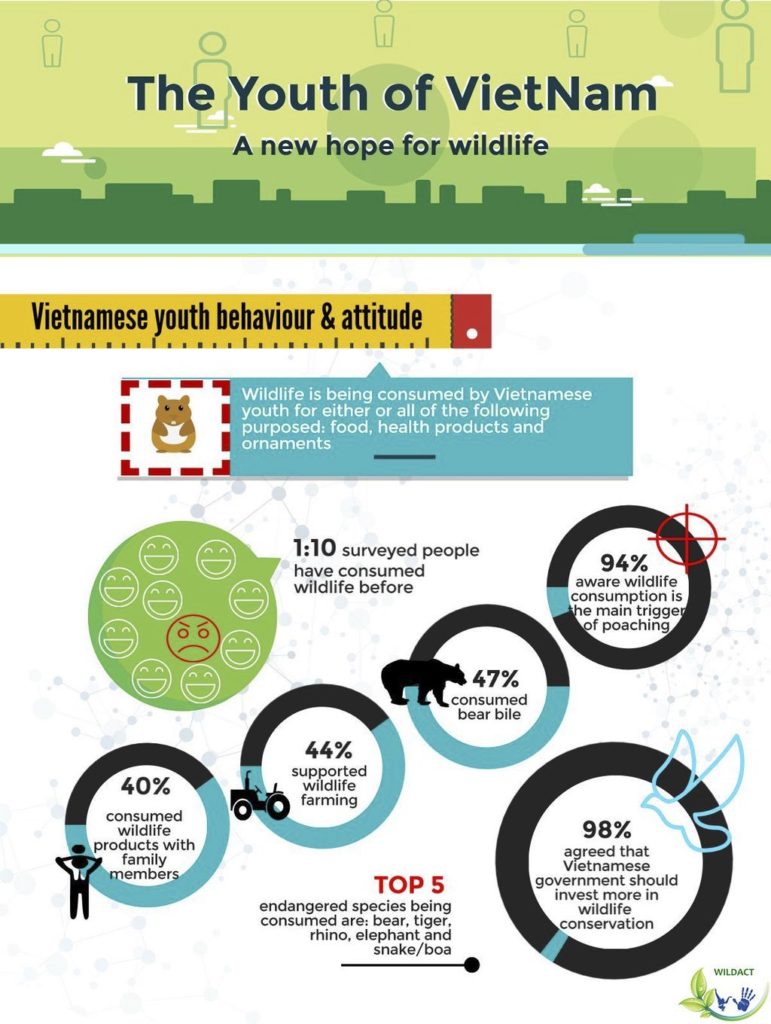 Results of a survey on Vietnamese youth behavior and attitude toward wildlife.

Fight Dog Meat is working alongside other reputable anti-dog meat organizations, as we all strive toward ending the worldwide dog and cat meat trade. We work closely with a number of animal rescue teams across Vietnam and consequently, we have a vested interest in all animal events in Vietnam, especially the treatment of endangered species.

DONATIONS: Fight Dog Meat does NOT accept donations.
WE HIGHLY RECOMMEND the Vietnam Animal Aid And Rescue (VAAR), who save dog meat dogs and cats and run a Vet Training School to teach local vets and trainees, humane practice on pets within Vietnam. Many local Vietnamese vets do NOT USE ANESTHETIC ON DOGS OR CATS DURING OPEN SURGERY!
VAAR’s Direct Paypal: cat.besch@gmail.com

One thought on “Vietnam: Rhino Horn and Dog Meat Interlinked”