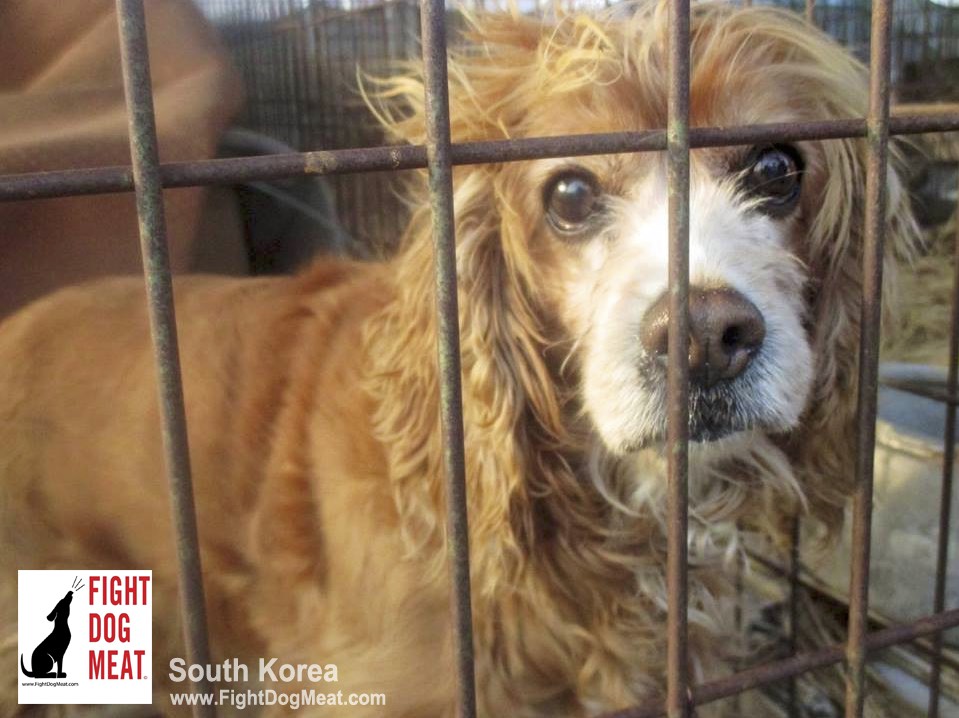 A few years ago I spent a horrifying full day at South Korea’s BokNal dog meat festival, held on the main day of the three dog eating days, which tie in with the hottest days of summer. Moran Market is South Korea’s main dog and cat slaughterhouses and killing rooms, and the location for Korea’s main BokNal festival.

The day was very busy, with around a thousand people, mainly men, gorging on plates of dog meat under huge marquee tents set up in the large car park. Many children were brought along too. It was a family day with a party atmosphere, filled with fun and laughter, which drowned out the screams of the dogs’ being slaughtered non-stop throughout the day, visible to party goers.

I had already been undercover at Moran Market each day, for several hours a day, and  had managed to break the ice with several dog butchers. I was standing in the doorway of a killing room, talking to a dog butcher, when a sweaty man walked up and abruptly emptied a loaded wheelbarrow, with four large heavy sealed black plastic bags. As the wheelbarrow contents tipped out, one bag hit my leg and landed on my feet. I stood in horror as the contents of the bag was thrashed violently against my leg and on my feet.

Each bag contained a live dog which was asphyxiating in front of me – on my feet! I had to fight not to vomit on the spot. Remember: I was standing inside a dog killing room with a dog butcher, and it was imperative I keep my cover, or I would suffer violence against me. The dog butcher pushed me to get my legs out from under the weight of the thrashing dogs, and I felt my own oxygen evaporating as I watched helplessly.

The owner of the dogs was a local restaurant owner who needed these four dogs butchered on the spot. He had driven through Seoul with the live dogs in the trunk of his car, sealed in heavy plastic bags. I cannot put into words the rage which swept over me as I stood opposite this revolting human being. But to those around me, I smiled and nodded my head and kept my cover. The dog butcher swung into action, shouting, and workers appeared and threw the bags of dogs into another wheelbarrow and they were wheeled away to be slaughtered, meters from where I was standing.

It was gut-wrenching to find out it was also “pet day.” There were hundreds of pet dogs and cats for sale as meat dogs and cats, for immediate slaughter. These animals were clearly once-loved pets, most of them were pure-bred breeds but were now starving, traumatized and forlorn. It was horrifying!

The “pets” were displayed in the full sun all day, with no shelter and no water or food. Thousands of people filed past, laughing and jeering at them. The hopelessness in the eyes of these animals will stay with me forever. 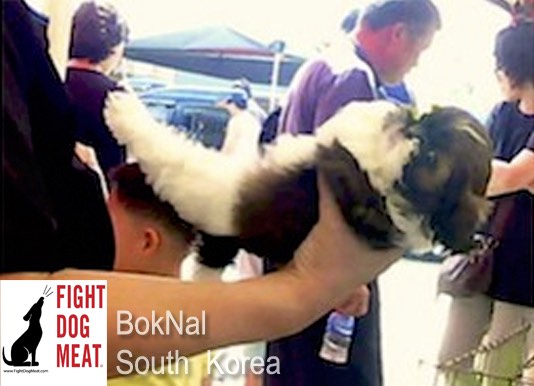 I watched this puppy be flipped over and examined by a man with a young child, looking to buy a dog meat to raise and slaughter at home.

I watched countless parents picking up puppies and examining them as you would examine an orange at a fruit stall. They were shopping for dog meat puppies, to raise and slaughter at home. They had young children with them who delighted in the puppies and kittens, as innocent children do.

I watched in horror as a female cat vendor picked up two live kittens and literally threw them into a large trash bin, which was being guarded by a security man. When I deliberately tossed a small piece of paper into the same bin, to look inside it, I saw other live puppies and kittens who had already been thrown in, to bake in the sun and die. Their little legs still moving and wriggling. All of them would die a horrible death, baking in the sun.

The security guard yelled at me to get back and go away. 15 mins later I made another excuse to have to go to the same trash bin to look again, but this time the guard angrily shouted at me. These animals had been thrown away because they had lost their perkiness, from baking in direct sunlight for several hours, without their mother’s milk.

In all of my time working undercover in dog and cat slaughterhouses and killing rooms in different countries, this was the only time I had to walk away and pretend I had something in my eye, as I fought not to fall on the ground and howl. I pretended to have something in my eye to wipe away the tears which uncontrollably fell from my eyes.

I could not allow my cover to be blown, as foreigners are not normally allowed into Moran Market. I only got ‘in’ because I acted like a dumb tourist who couldn’t understand what they were yelling at me on the fist day I went into Moran Market, and I shamelessly giggled my way into being allowed to stay. I spent a full week inside Moran Market and ended up being invited into the actual dog killing rooms (which I will write more on in further articles.)

Cats are the forgotten victims of the dog meat trade. South Korea has blistering heat in summer and sub-zero temperatures and deep snow in winter. Cats are often hated, seen as evil and suffer horribly. At Moran Market cats are boiled alive in large vats and made into (false) health food tonic drinks. Puppies which do not sell quickly are also boiled and made into elixir drinks, which are falsely marketed to boost a man’s libido. I saw this happen. 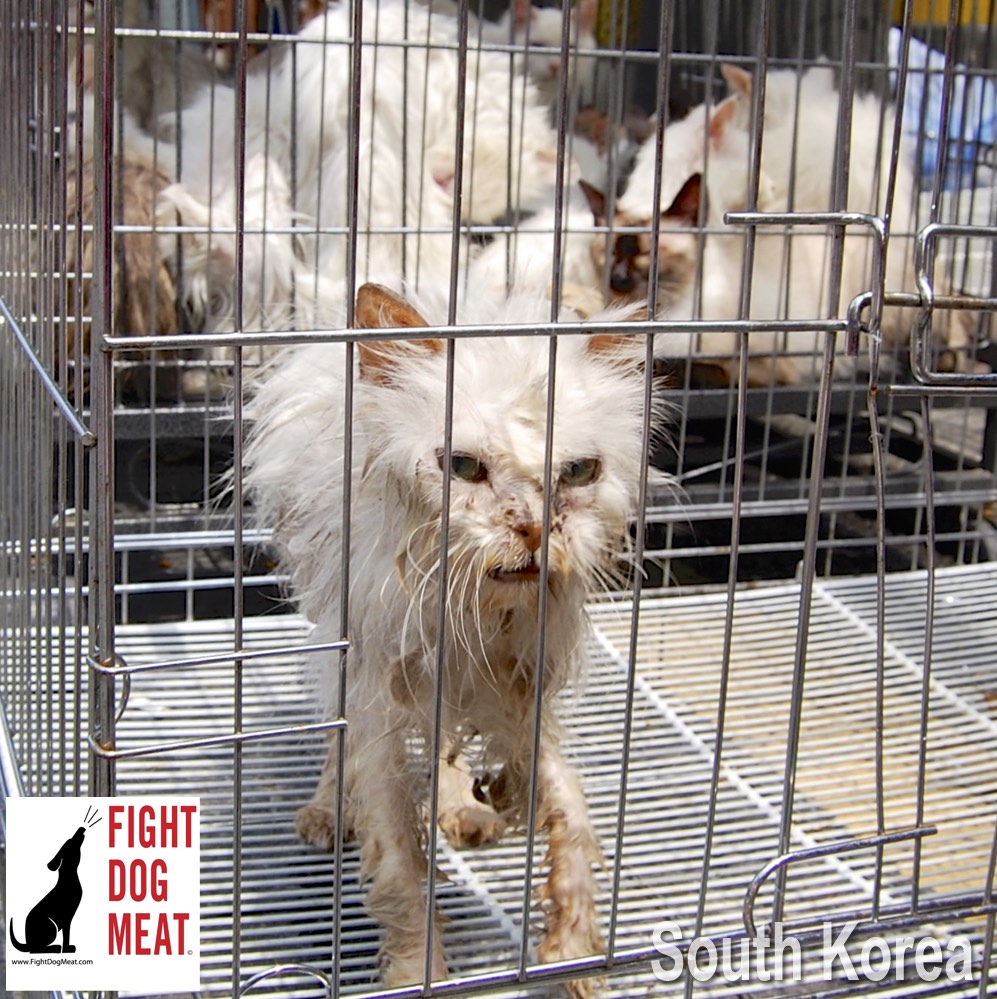 In South Kora and everywhere else, cats are the forgotten victims of the dog meat trade.

The date BokNal was supposed to take place, according to FaceBook posts, was incorrect. The actual BokNal festival was a day earlier than expected! Because I was going to Moran Market everyday, it was by accident that I found the main dog eating festival day was a day early. Anyone who went to Moran Market on the day of the FaceBook date would have found it to be empty.

South Korea has a growing number of animal lovers and pet owners.  South Korea’s Animal and Plant Quarantine Agency reports that 21.8% of households have household pets. The following not only applies to South Korea, but all dog and cat eating countries.

I personally know of a number of instances where South Korean families have eaten their own ‘once-loved’ family pet. On one occasion the dog had been the family pet, living inside the house for six years, and was taken to a picnic barbecue, the same as many people would take their pets to for a fun day out. As people milled around and enjoyed each others company, this particular family strung up and hung their own pet dog from a tree, then barbecued it and ate it.

I know many instances where children are given a puppy to play with for a few months, and one day the child comes home from school and is served that puppy for dinner, cooked as a stew for the family meal. This is not uncommon in South Korea.

Outside one of the main slaughterhouses in Moran Market, because it was party day, BokNal, a vendor was selling toy dogs with a striking similarity to the South Korean “yellow dog” which is one of the main meat dogs bred on dog farms. They are a large dog, very docile in nature and sweet personality. These toy dogs were set up to show children how you could hang a toy dog at home, for fun. Just like the real thing. 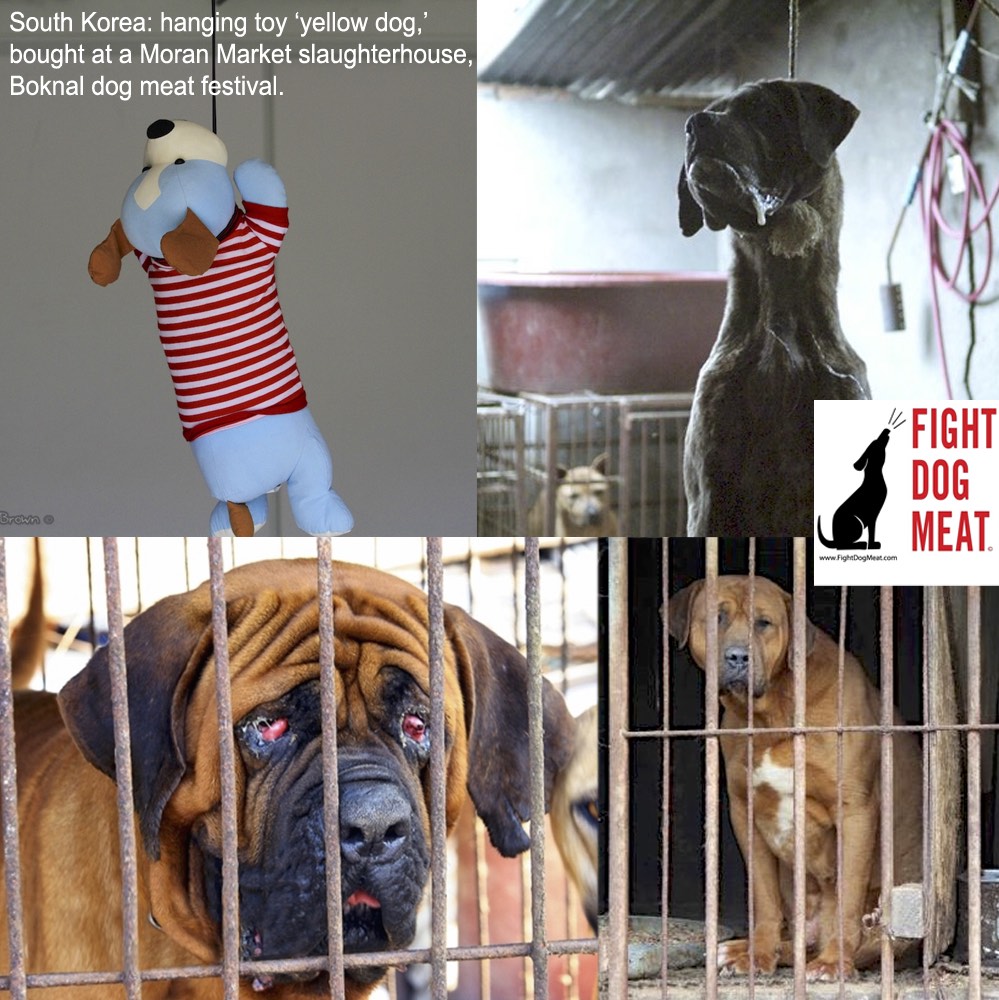 I bought this toy ‘hanging yellow dog’ outside a dog slaughterhouse, in Moran Market, during BokNal dog meat festival. The toy has a striking resemblance to the common yellow dogs of South Korea.

Why do South Korean dog eaters believe dog meat “cools them down” in summer, when Chinese people eat dog meat to “warm them up” during winter? The South Korean signature dish “Boshintang” is an actual soup. I have seen large cauldrons of it being cooked, with dog heads and body parts swilling around in it. It is quite hideous to see a dog’s jaw bones pop up with the distinguishable rows of teeth still intact.

But what is the secret to it cooling people down? Because boshtintang is a soup, it is made with a lot of liquid, so when a person consumes the soup they are ingesting large amounts of liquid, which hydrates them. This is no different than having a hot cup of tea on a hot day – the tea doesn’t cool you down, the hydration does! Consequently, dog soup hydrates people on a very hot day.

It is wonderful that South Korea has a growing number of pet owners and strong animal activists who are helping educate new pet owners on responsible pet ownership and all forms of humane animal treatment, for all animals.

This is the first time I have spoken about my time in South Korea and the BokNal festival. I will continue to publish more articles now that I have finally had the opportunity to speak about BokNal, which was traumatic as I worked to gather information inside South Korea’s dog and cat meat trade.

Fight Dog Meat is a Registered Charity. We work with a number of animal rescue teams living in dog and cat meat countries, including Indonesia. If you would like to help the animals and rescuers we work with, please consider a small donation.