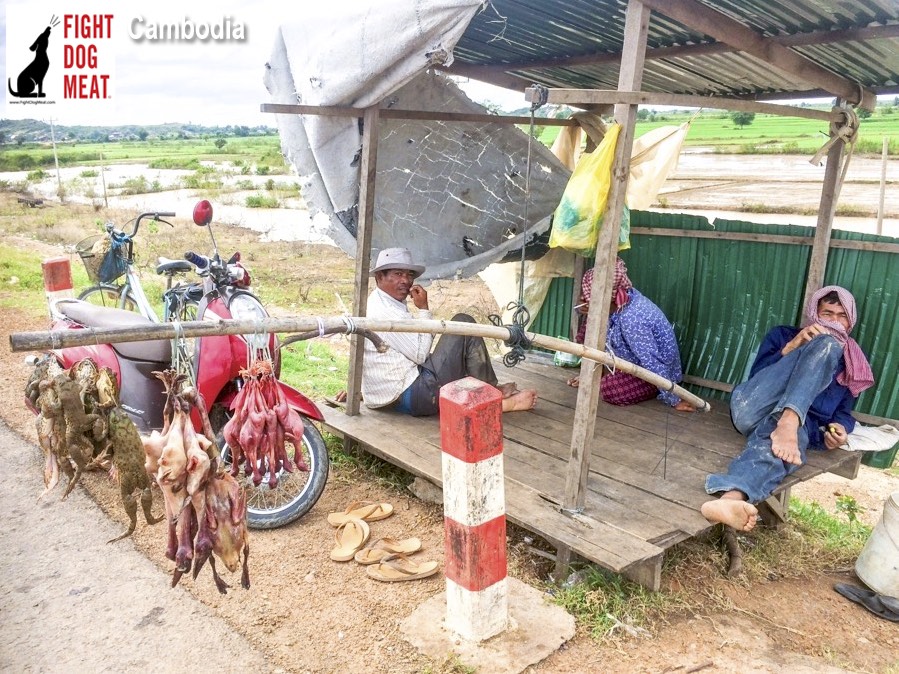 Cambodian district officials confiscated charred carcasses of domestic cats being sold as a vulnerable species of cat along the side of the road, saying it was “socially disruptive.” The cat butchers were located after the butchers posted photographs on their Facebook page, and made claims about the meat.

The cat butchers set up their meat stall along National Road 6 in Kampong Cham province’s Bantheay district. The top photograph shows three charred domestic cats hanging by meat hooks along the side of the road (Photo credit: Khmer Times.)

One of the vendors told the Khmer Times: “The district officials came four or five days ago. If we’re caught selling the cats, we’re fined one million riel [about $250]. We received a warning, but they’re just domestic cats.” The cat butchers are claiming the cats are wild fishing cats which are listed as vulnerable by the International Union for Conservation of Nature.

Batheay district police chief Sam Nal said it was the vendors’ false claims that caused the authorities to confiscate the meat. “It is a cheating business where they cheat, lying to the people from other areas by saying they are fishing cats or wildlife meat, when it is actually dog and cat meat, and it deserves to be cracked down on,” he said. 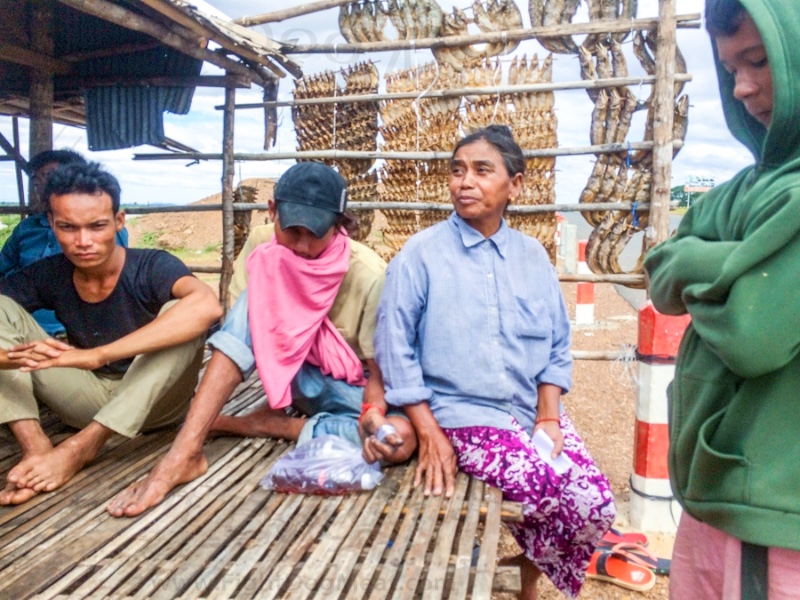 Angry cat meat butchers after all their meat, including their cat carcasses were confiscated by authorities.

Some vendors buy meat from scavengers and hunters from Chealea village, about one kilometer east of the stalls. The scavengers lure and capture cats from anywhere they can get them.  Some are shot and some are captured alive to be sold to the roadside vendors, for the vendors to drown before selling ( just like above.)

Some of the cats are caught in Phom Phenh and driven to rural areas where people like eating cat meat. A 32 year old local farmer said: “The people in Phnom Penh hate eating cats, so they get brought here and they tell the buyer that it is a fishing cat.”

Cat meat sells for approximately 25,000 riel (about $6) per kilogram and is mostly sold to Cambodian and Vietnamese travelers, who falsely believe the meat provides extra health benefits.

Police Chief Mr. Nal denied the vendors’ claim that authorities threatened to fine them if they were caught selling cat meat. “We never do that to them and we never want to have problems with them. What we want is that they do business by not lying to the customers,” he said.

A 30 year old cat butcher said she has been selling all kinds of meat for over 10 years, to survive and feed her three children. She said she tried to get work at a nearby garment factory, but the factory sets the age limit for employment at 25.

Dean Lague, a technical adviser for Wildlife Alliance’s Wildlife Response and Rescue Team, said the wildlife team frequently patrols the area in an attempt to stop the vendors from selling the meat, but admits it is difficult to take action against them because it is the vendor’s sole source of income.

“It’s fairly clear they don’t have any ability to pay a fine and having them detained in custody to attend court doesn’t reflect their level of offending or circumstances,” he said.

He said after crackdowns by officials, many hunters and scavengers move to Thailand for work to get away from their business drying up.

Mr. Lague said his organization tries to educate vendors on forestry law and what animals they are legally allowed to sell. “Team members take the time to ensure the traders are educated regarding the forestry law and also the general environmental impact their trading is having,” he said (end of report by Khmer Times.)