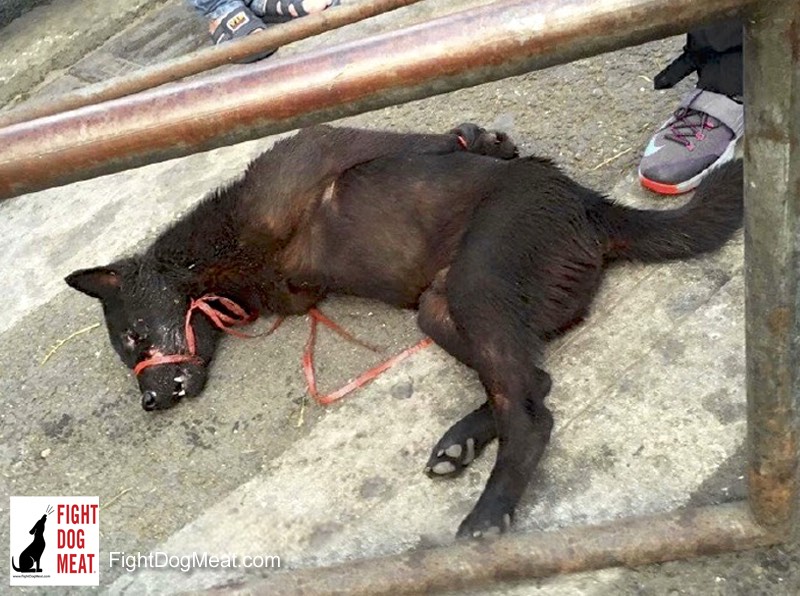 One of the biggest customers of the dog meat trade are Christian faith churches and their parishioners, making Christmas the busiest time of the year for many dog butchers throughout Asia. During one of my trips to Vietnam a dog butcher told me “Christians eat more dog meat than anyone because the churches order dog meat for their festivals. So Christians want to eat it every time they celebrate something.”

In South Korea, mainstream christian churches of all denominations have occasional congregational picnics where a live dog is taken along, thinking it’s having a fun day out. As the women prepare side-dishes, the men string the dog up from a branch in a tree and beat it to death, as it hangs helplessly. I have personally fought about this with South Korean Christians and I’ve been told to my face that the dog died in a beautiful setting so what else could it want? [I am not kidding!]

In Indonesia dog meat is served at many christian bible study groups, to encourage people to attend and learn about love and compassion! One particular christian minister from the United States, living and teaching Christianity in Indonesia, videoed himself and his wife making dog meat stews for his bible study parishioners, which I featured on Fight Dog Meat’s website. When he realized he was featured on my website, he panicked and removed his videos and locked up his account, but he still promotes and distributes dog meat as a christian meal for his parishioners.

I know a lady who attends a christian church in Cambodia which kills dog meat dogs each Sunday morning, right before they give their sermon, to encourage people to attend for the meal of dog meat which follows the sermon. The lady I know said she always goes late, to avoid the horrific screams of the dogs being killed. She does NOT eat dog meat. Every christian church in her area of Cambodia kills dog meat dogs for it’s parishioners, so she can’t just go to another church. She told me that as an animal lover, attending church leaves her deeply distressed and suffering depression.

A couple of years ago in Indonesia, with my friend Nancy, I was instrumental in closing a dog meat farm down, at a children’s orphanage, which was connected to a United States franchise of Christian churches (name known but temporarily withheld). This US church has 620 congregations in the USA and 2,400 churches worldwide.

The little orphan children regularly witnessed the dogs being brutally slaughtered and would weep and say they “couldn’t stop hearing the dogs’ screaming.” The dead dogs would then be served to the weeping children as their dinner. Many of the little orphan children suffered on-going nightmares and bed wetting each time they witnessed another brutal slaughter from the hands a dog butcher from Sulawesi.

I am pleased to report that we managed to remove all the dogs and NO MONEY was paid to the orphanage or the dog butcher! A huge fight erupted and things were tense, but all the dogs were removed into rescue and all the cages removed and never replaced. One dog gave birth to a litter of puppies the day after being rescued, and all the animals were successfully re-homed into loving homes where they’re still living today.

The dog and cat meat trade is full of harsh realities and we shouldn’t not turn away from these things which make us uncomfortable. Fight Dog Meat will continue to bring you reports from dog and cat meat countries and the wonderful work rescuers are doing in those countries.