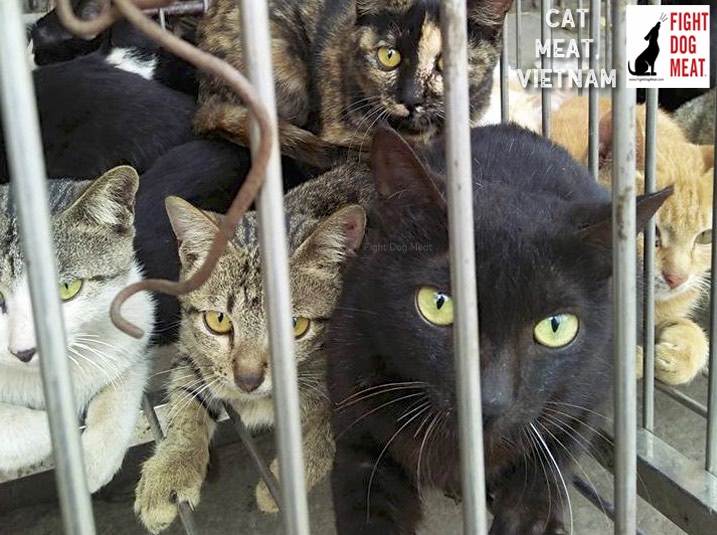 Many local people in Vietnam, who believe in superstitions, believe a visit to your house from a stray cat is a sign of impending doom and even worse if the stray cat is on your roof. Both mean your about to be hit with bad luck. Superstition about luck and bad luck is so strongly believed in Vietnam that many local people eat “Little Tiger” cat meat at the start of each month to keep evil away for that month.

Cats in Vietnam are often feared and seen as evil because of their (falsely believed) supernatural power over luck and bad luck. This is often the case in most dog eating countries, but based on ratio per population, Vietnam has the greatest cat meat trade (and dog meat trade.)

A dog and cat butcher in Vietnam told me that when you eat a cat’s spine once a month you end up with the cat’s agility. Vietnam Cat Welfare recently reported that in central Vietnam drops of cat urine into a person’s ears were being prescribed to cure hearing and deafness problems.

In the late 1990s so many cats were eaten in Vietnam that rodents took over farms in plague proportions and destroyed the year’s crops. In 1998 the Vietnamese government introduced a “Rat Eradication” law to shut down cat meat restaurants and “seriously deal with” cat smugglers. In 2017 cat meat is still freely available across Vietnam.

An intensely vicious argument has been raging online between local animal lovers and local dog eaters, after dog eaters infiltrated Vietnamese animal support groups for pet owners. Both sides got heated very fast and dog eaters started reporting numerous pet owners personal pages to Facebook, to have them shut down.

Fortunately the pet owners were able to have their pages reinstated, despite the annoyance. Both sides refuse to back down. There is a lot at stake. Dog and cat eaters attacking pet owners online probably include butchers and no doubt, dog thieves and dog traders.

The following is an example of a dog eater who infiltrated a Vietnamese pet owners group:

“I’m from Hanoi, my boyfriend was invited to my house to eat dog meat and drink with my family.
My boyfriend refused and said dogs are not food.
My boyfriend had an argument with my daddy.
He broke up with me after that. I’m so upset and confused.
Since when eating dog meat is brutal and evil.
Dog meat is our tradition.
Our ancestors, grandfathers all ate dog meat.
What’s wrong about eating dog meat.
It’s our tradition every time we meet and gather.
There are many kinds of dogs, dogs to keep house.
Weak, stupid, sick dogs can be eaten.
What should I do, sisters?” [originally written in Vietnamese.]

When genuine pet owners responded to the post, dog eaters saw who to attack and report, to attempt to shut their personal accounts down. Then things escalated into an online stand-off against each other. Local pet owners take this subject very seriously and desperately want the dog and cat meat trade shut down in Vietnam.

Cats are the forgotten victims of the dog meat trade. They do not receive a fraction of the coverage or readership interest, as dog receive. Fight Dog Meat is fighting just as hard for cats as for dogs.