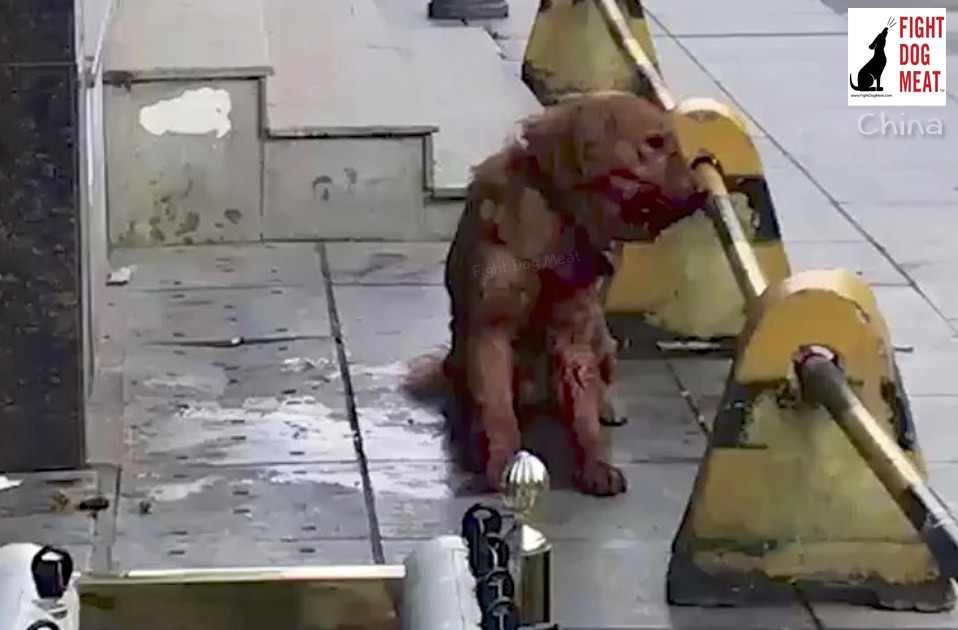 As the officer’s wooden pole smashed into the petrified Golden Retriever’s head one more time, the dog wailed out in agony at the blinding pain ripping through his brain, shattered skull and facial bones. Sliding in a pool of his own blood, the tied up dog screamed for mercy and thrashed on the ground as the pain intensified. Officer Hu Hanlin pumped his chest out and strutted around like a peacock, proud of his accomplishment. Onlookers stood motionless in disbelief and horrified repulsion.

Fight Dog Meat has received many comments on our previous website article about this dog’s death, but also from people justifying the police officer’s actions. Some people are congratulating him for killing the dog and ridding the streets of vicious and rabid dogs.  A lot of misinformation is now circulating about this case, as if by design to throw media off covering the story due to contradictory stories popping up. 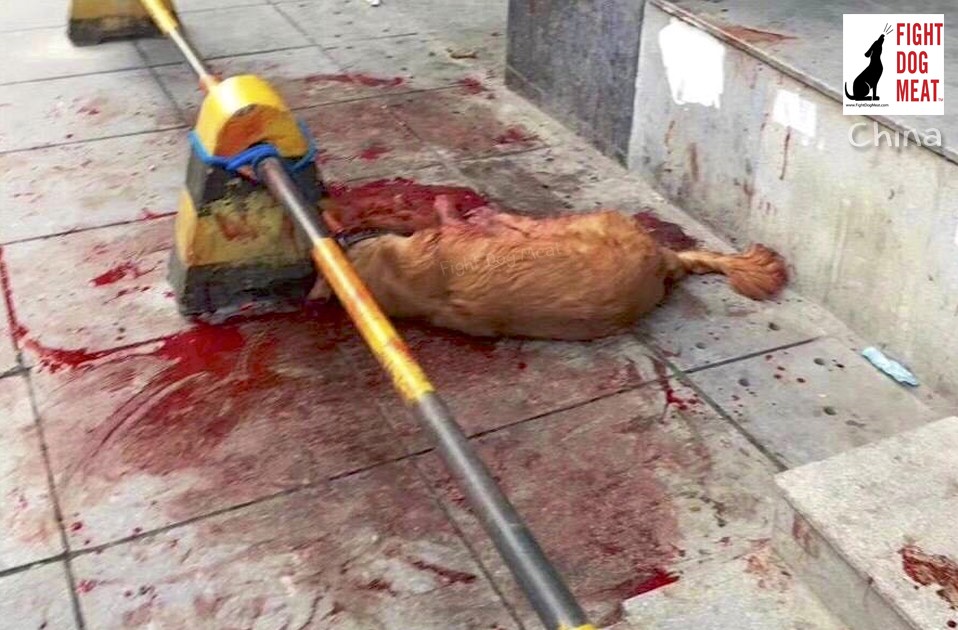 The bludgeoned Golden Retriever lays in a pool of his own blood.

One of the comments justifying the officer’s actions said there’s a lot more serious things than dog bites and used the threat of rabies to applaud the officer’s actions. They said half the people in China have uncivilized dogs, owned by so-called animal lovers who abandon their dogs to the streets and do not regularly feed them.

Another comment says the dog had bitten over one dozen people and everyone was too scared to go near it. I do not believe that at all! I’ve seen the video of the dog “attacking the old man” and it clearly shows the dog wagging his tail and eager for human contact. It was ‘not’ an attack. Another comment says they clearly support the officer for taking away the threat to pedestrians. 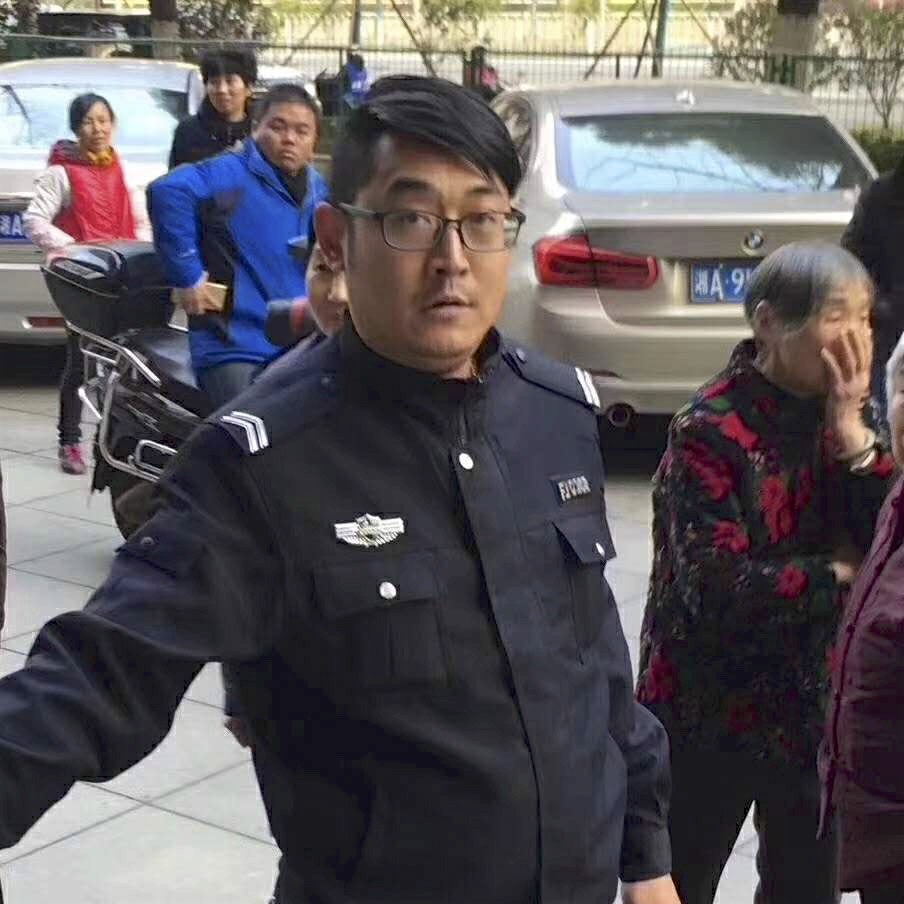 The Changsha police officer who tortured the Golden Retriever to death.

The Golden Retriever was bludgeoned to death on December 31, 2017, over a three hour period. The attack took place at the gate of Puyuan bus station on Furong road, Changsha.

The dog was already tied up to a concrete fixture and as people walked past, its reported the boisterous dog rushed forward to say “Hi” to passing pedestrians. The dog had been boarded at a local vet hospital for some time and had never shown any hint of aggressiveness. The friendly dog was adopted to a family whom the clinic believed would provide a good home. 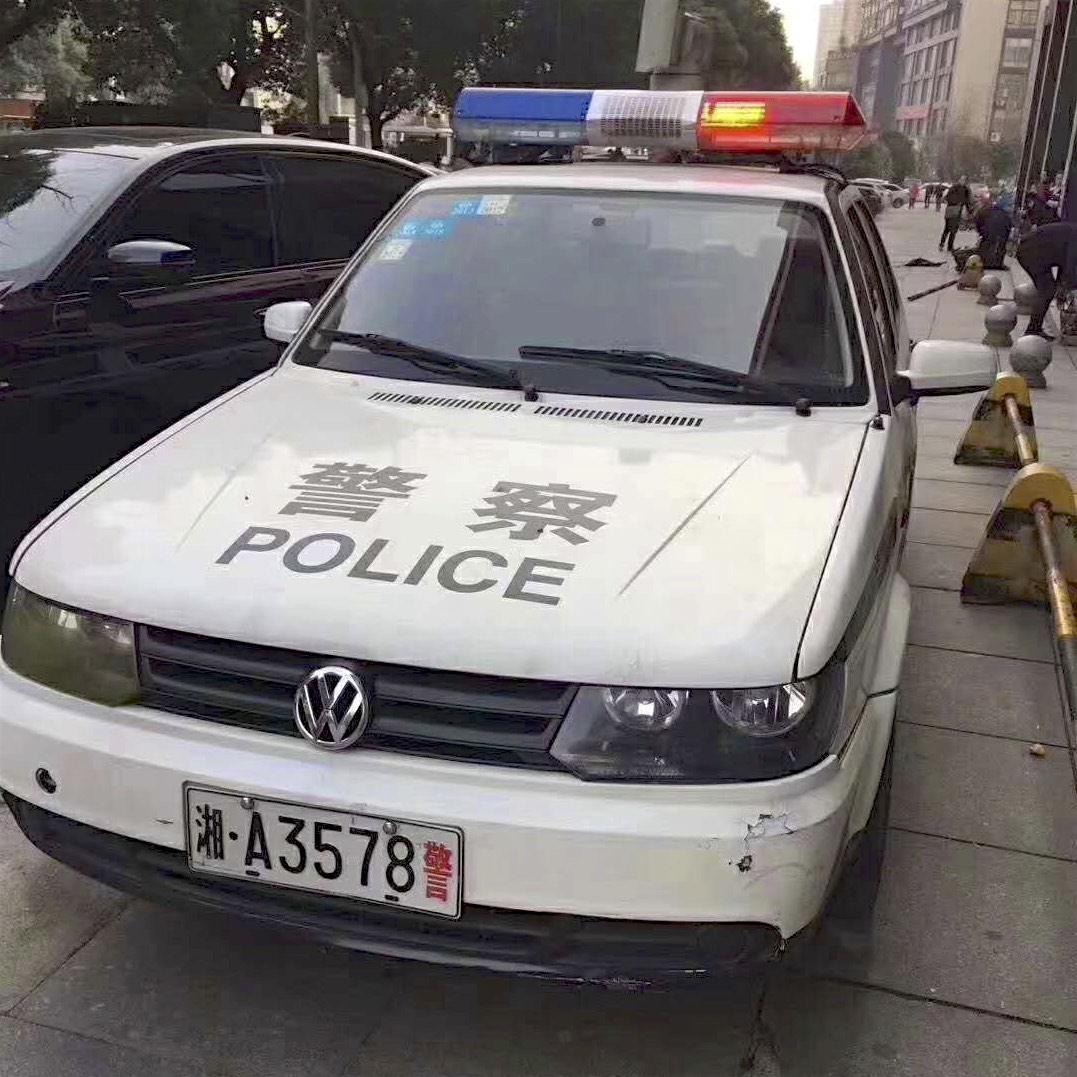 The irresponsible owner needs to take some responsibility too! The dog should not have been tied up on a walk way in Changsha, China where many people are genuinely scared of dogs; especially large dogs!

The frail old man who claimed the dog “attacked” him doesn’t have a scratch on his leg at all! However the dog scared the old man enough that he complained to police and obviously embellished the story. The police reaction is outrageous, unlawful and disgusting. The officer brutally bludgeoned the tied up dog in front of impressionable young children in a public place.

Animal lovers tried to intervene but were refused entry and held back by other officers, under the threat of arrest if they intervened. Onlookers wept and screamed in horror, unable to stop the attack or save the dog.

Fight Dog Meat will continue to expose the plight of animals in countries with no animal protection laws. We hope you will join us later in the year when we launch our rally events for 2018. We need to send a loud and clear message that animal cruelty will not be ignored. Animal protection laws must be implemented and upheld, and the brutal dog and cat meat trades shut down for good.