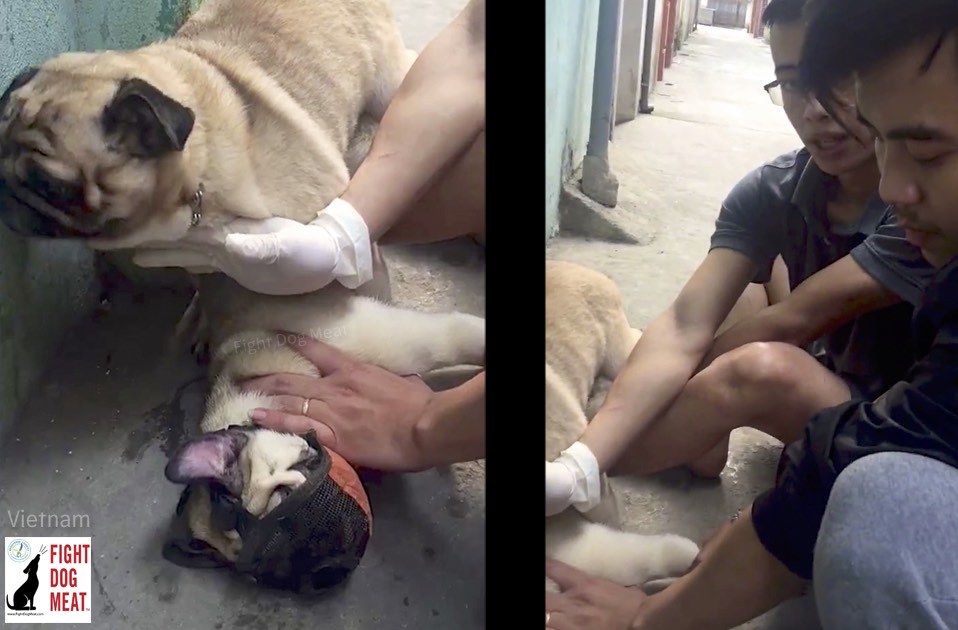 Pug dogs, poodles and French Bulldogs are trapped in a living hell inside a puppy mill in Hanoi, Vietnam. Female dogs are hooded, muzzled and chained in heavy chains, then physically held down by multiple men as they’re forcibly mated (raped) by scared and exhausted male dogs.

The male dogs are forced to mate and not allowed to stop. You can see fear and loathing in their face. They want to stop. They want it to end. These dogs are disposable money making machines that can be discarded when they fail.

The dogs are forced to live in small wire cages, stacked on top of each other all in one room. The stench must be unimaginable. All the dogs are de-barked and reduced to making weird grunting sounds. When dogs are put on the treadmill  the speed is cranked up beyond normal walking speed for small dogs, placing them in a dangerous situation.

As female dogs are giving birth, men rip puppies from inside the mother’s birth canal, dragging them out by a hind leg. Men rub the newborn puppies down with a towel. It is complete interference of the birthing process by ignorant and money hungry breeders who have no regard for the animal’s welfare.

Thành Lê is the owner of the puppy mill breeding operation, promoting his business on Facebook. He also runs Facebook pages to sell the different breeds, under the false illusion of warm and fuzzy happy pets.

Thành Lê’s puppy mill is peddling rape and animal abuse. As shown in video evidence, sometimes all the different breeds of dogs are locked in one large area and all mate each other; poodles with pugs, bulldogs with poodles, etc. Sickening to see.

VIDEO: de-barked dogs stacked on top of each other in small cages. Forced mating, followed by puppies being ripped out of the mother’s birth canal. And the mass mating room. The video shows how irresponsible, cruel and money hungry the breeder is.

Fight Dog Meat works with animal rescue teams in Vietnam and many local animal lovers. Many Vietnamese rescuers do amazing work with next to nothing. They’re exhausted, broke and many end up suffering depression because of the never ending animal cruelty surrounding them every day. We’re helping them have a voice to bring in animal protection laws in their country.