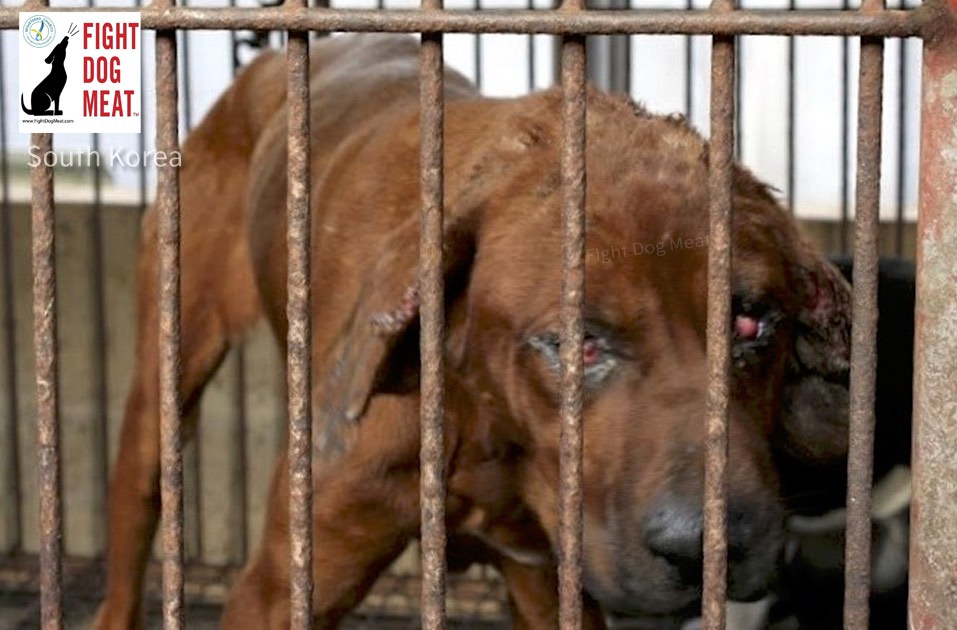 South Korea farms dogs specifically for meat. The main dogs farmed are known as Yellow dogs, which are Japanese Mastiffs, however any dog can end up in a dog farm. Japanese Mastiff dogs are large in size and extremely docile in nature. They live a shocking life in squalor and never touch grass or get to stretch their legs and run before being brutally slaughtered for meat.

Dog farm dogs are fed swill which is outlawed in many countries around the world. Swill is left over rotting food stuffs all thrown in together. The dogs are also fed rotting body parts of fellow cage mates as they die. Everything goes into the dogs’ food, forcing them into cannibalism, while locked in rows of small raised iron cages. South Korea has blistering hot summers and sub-zero freezing winters. Dog farm dogs have little to no shelter from the elements in their tiny iron cages above the ground. 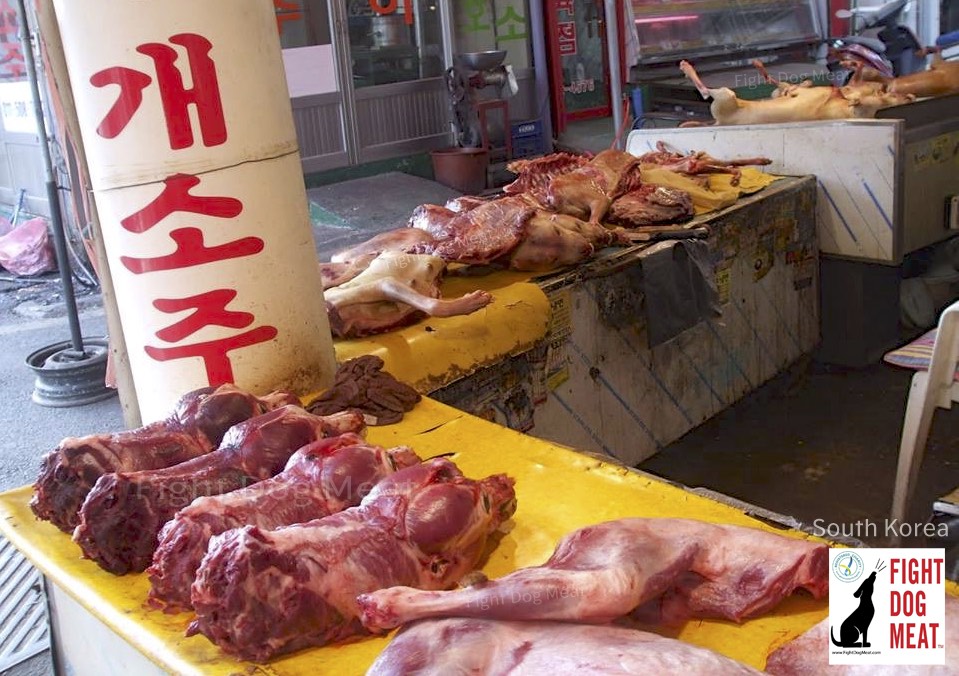 Back when I was in South Korea I saw so many bags and drums of rotted food stuffs left on the edge of pedestrian sidewalks, to be picked up for dog farms. Contents of these containers made up the daily swill to feed the dogs. Left over food from schools are included in the swill. Nothing that is free is wasted. Consequently the dogs never receive proper nutrition.

On May 16, 2018, dog farmers and dog butchers staged a public protest claiming to be victims of unfair treatment, pleading for equal rights as mainstream livestock farmers. Around 300 members of the Korea Dog Farm Council, dog farmers and dog butchers, publicly petitioned the ruling Democratic Party of Korea headquarters in Yeouido, Seoul, for a grace period for dog farms to install excreta treatment facilities. 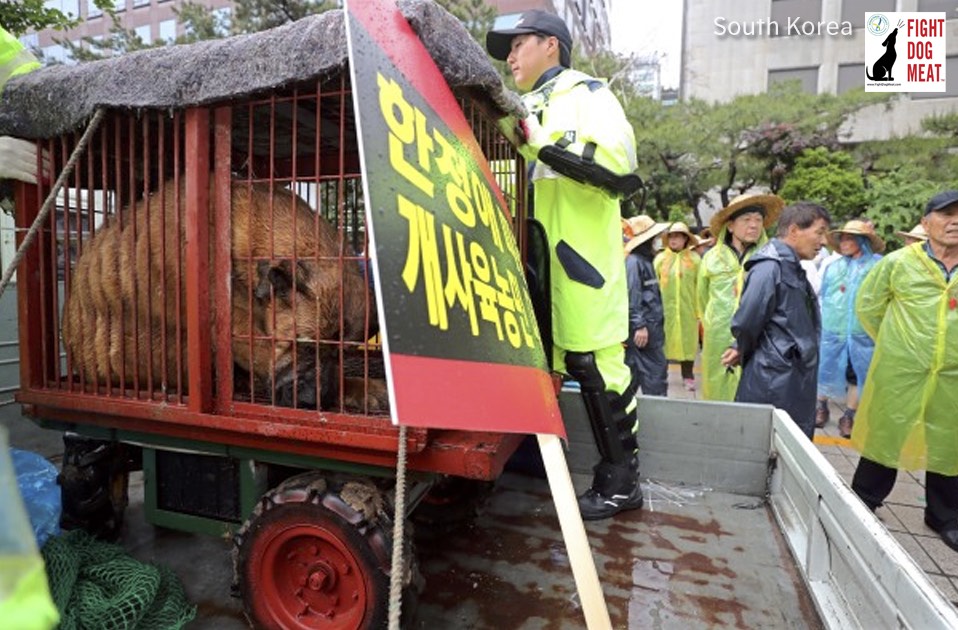 Yellow dog meat dog in a death cage, being paraded during the protest.

Dog farmers paraded five ‘yellow dogs’ in death cages in an attempt to (falsely) persuade  onlookers of the difference between a pet dog and a meat dog. Korean animal activists attended the rally and immediately offered to buy the five yellow dogs, to save them from slaughter. Enraged dog farmers demanded US$10,000 for just one dog!

The sign in the truck says: “If you can keep this dog as a pet, then it is free.” The farmers argued  that no one would truly want such a big dog as a pet and that this [yellow] dog (like the other ones) are meant to be used for meat.

Korean activists faced off with the dog farmers and butchers and stood their ground to save the five yellow dog meat dogs. This infuriated the 300 dog farm members and tensions escalated. 400 police were dispatched before chaos broke out. Two dog farmers were arrested at the scene for attacking activists and police. 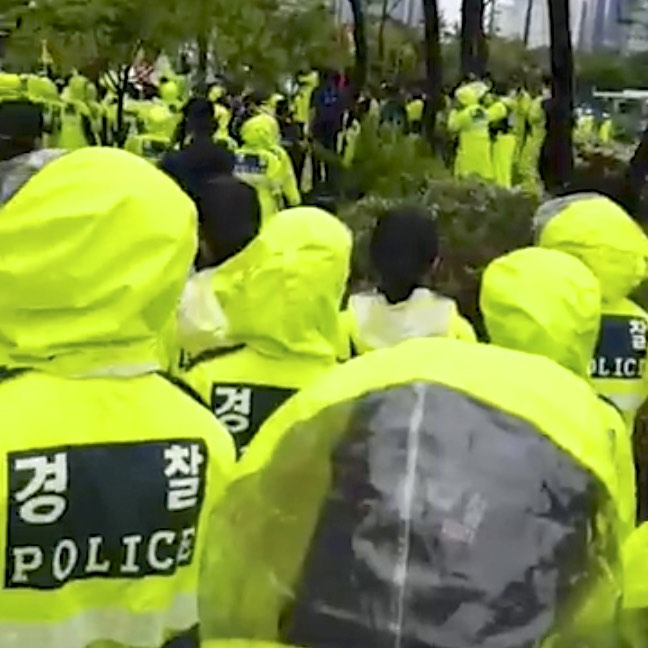 400 police were dispatched to control escalating tensions between farmers, butchers and activists.

Dog farmers and butchers are protesting because “in February, the National Assembly passed a revision to the Act on the Management and Use of Livestock Excreta, mandating animal farms operating without permits to install excreta treatment facilities. While all farms were given a grace period of six months, dog meat farms were subjected to the law immediately when it went into effect in March, ” said The Korea Herald.

Video from May 16, c/o activist Jenny Kim, who attended the protest:

On Saturday August 25th, 2018, Fight Dog Meat is hosting a world event to call for an end to the dog and cat meat trade and abolish greyhound exports to China. Please mark your calendar so you can take part on the day. More details to come.

Fight Dog Meat is a Registered Charity. We work with a number of animal rescue teams living in dog and cat meat countries, including South Korea. If you would like to help please consider a small donation.