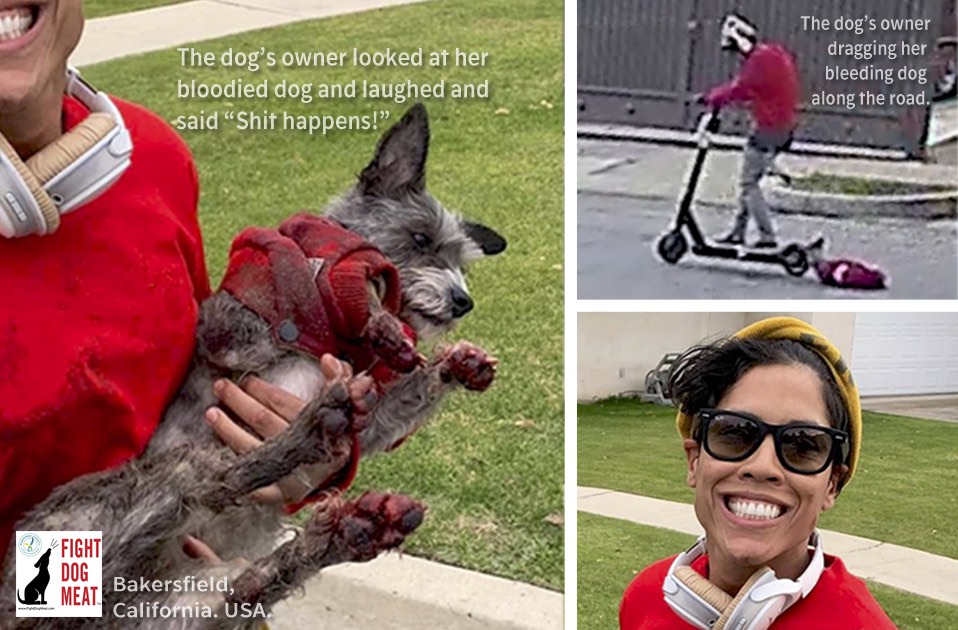 All four paws were shredded raw and bleeding. He ran as fast as he could for as long as he could before collapsing. The paw injuries occurred ‘before’ the dog collapsed and was seen being dragged along the road. The moment he collapsed and fell to his side the woman would have felt wrenching movement on her scooter, plus loss of power caused by dragging the dead weight of the semi-unconscious dog. When finally confronted the woman laughed and said “Shit happens.” This is deliberate animal cruelty against an innocent animal unable to defend itself.

Bakersfield, Californian local residents were horrified to see the collapsed small dog covered in blood being dragged along the road by the adult woman riding her electric scooter. The semi-unconscious dog, known as Zebra, was being dragged by his owner [tentatively identified as Chelsea Vasquez.]

Brandon Sanders was one of the local witnesses to the act of cruelty who intercepted the woman to demand she do something. He said the dog was ‘bloody and had been dragged by it’s leash for at least 100 yards at about 15mph.” The injuries show the dog had endured so much more than that, before it collapsed.

Video footage was retrieved from resident James Dowell’s home security cameras showing the woman going down the road with the collapsed and bloodied dog dragging behind her.

Eyewitness News said Bakersfield Police Sgt. Brian Holcombe confirmed police had questioned the dog’s owner. They said Bakersfield Police took the dog for medical attention. If the woman had any remorse for what she did to her own dog, surely she would have immediately taken her dog to a veterinary hospital for urgent treatment. The dog would have been in terrible pain and open to serious infections.

No charges have been laid. The woman got a lawyer and is claiming she’s the victim. If you would like to speak up on behalf of the dog ‘Zebra’ please phone Bakersfield Police Department: 661 327 7111. You can also speak to the Bakersfield District Attorney’s Office: 661 868 2340.

Fight Dog Meat has seen many cases of dogs dragged behind vehicles and it’s obvious there’s much more to this story prior to the100 yards of home  security video footage showing the dog being dragged along the road.

UPDATE: Bakersfield Police have confirmed the dog is now under the care of a different person. The dog has been released from hospital.