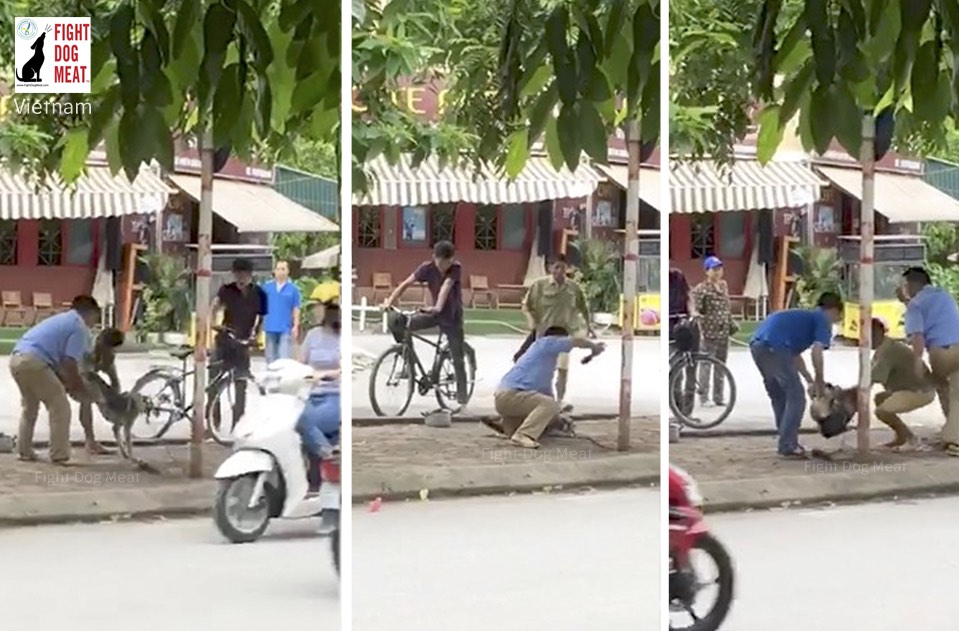 Bystanders watched as the dog wailed for mercy. A dog thief had grabbed an unsuspecting friendly dog on the street. Probably a pet who wasn’t supposed to be wandering, because it was dragging a rope attached to it’s collar. The man lifted the dog’s hind legs off the ground to disable the dog then flipped him over onto the ground. The man then began brutally killing the dog in broad daylight in the middle of the street.

A number of bystanders stood and watched the show. Some motorbike riders slowed up and some even stopped to watch. Not one person intervened on behalf of the dog. Vietnam’s dog meat trade is the most violent of all the dog and cat meat countries. A scared young animal lover secretly took this 50 second video from a distance. They were too scared to even go near the men for fear of being savagely beaten.

Why is dog meat eaten?

Dog thieves of any sort are the most hated people in Vietnam. They’re vicious and brutal. These men stole this dog to eat some dog meat under the false belief it boosts their libido. That’s absolute rubbish! Vietnamese dog eaters believe that “eating tough meat makes men tough.” Years ago in Vietnam, I was told that sentence to my face by a well educated Vietnamese man who enjoyed eating toughened dog meat. He absolutely believed eating dog meat enhanced his libido and gave him more stamina in the bedroom.

Dog meat is made tough when the conscious dog’s body is flooded with adrenaline. This comes about through fear or pain to the point of death while still conscious. The dog in this video would have tough meat, because of it’s wailing in terror and pain. The men eating this dog’s meat would see that meat the same as western men see viagra. *sigh*