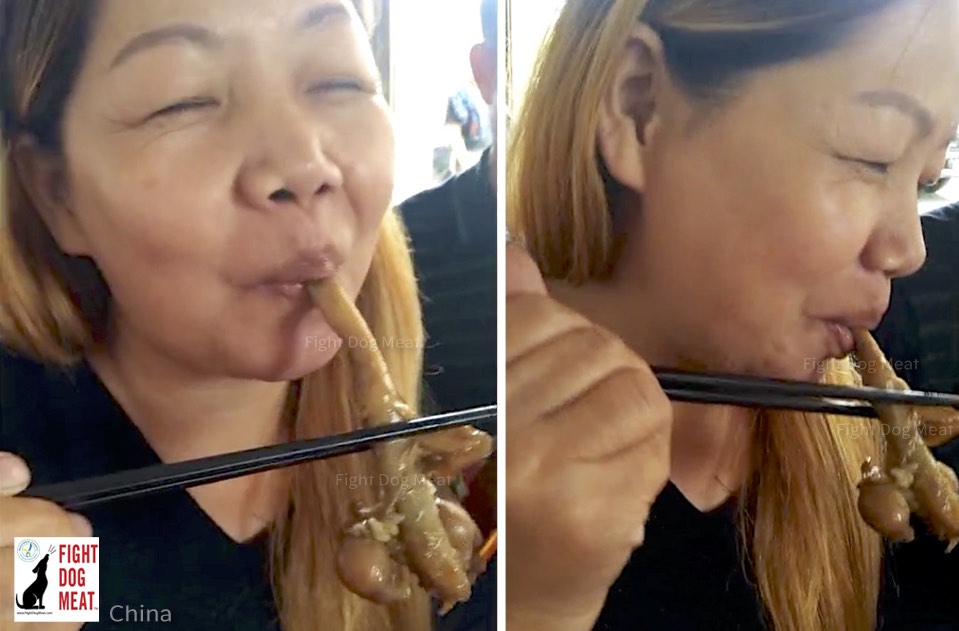 Dog genitals are a specialty dish in China. Many dog meat restaurants list Dog Penis on their menus to entice customers. Chinese men prize the dog penis meal in the hope it will increase their virility. There’s restaurants available which only serve genitals from various animals of different species. Even in those specialty restaurants the dog penis is among the most sought after. Its falsely believed eating a dog penis will impart sexual stamina, impart stronger breeding capacity and virility.

Video: woman eating a dog penis and testicles at this year’s Yulin, 2019.

Chinese lunar calendar runs the summer solstice period for 10 days, unlike western calendars which only show it for one day. In various parts of China the summer solstice is considered a time to gorge on dog meat and lychees, washed down with alcohol, to bring good luck on the upcoming year. These days its just a time to get drunk, be obnoxious  and gorge on dog meat.

Yulin city council declared the Yulin dog meat and lychee eating event a “local folk custom” to block international condemnation of the event. Its like putting an invisible shield around the event making it impervious to international glare. In other words its a giant ‘screw you’ to anyone who doesn’t like it.

Keeping quiet about things does not stop anything! Worldwide outrage is necessary for governments to take notice. We are pressuring governments by being a voice for these animals. Ultimately it is animal lovers living in these countries whom their own government will be forced to listen to, to enact positive change.

Fight Dog Meat will continue to bring you reports from dog and cat meat countries and the wonderful work their rescuers are doing, for their loved animals of all species!

Fight Dog Meat is a Registered Charity. We work with a number of animal rescue teams, including Bohe in northern China and the Haven Sanctuary out of Shanghai. If you would like to help the animals and rescuers we work with in dog and cat meat countries, please consider a small donation.