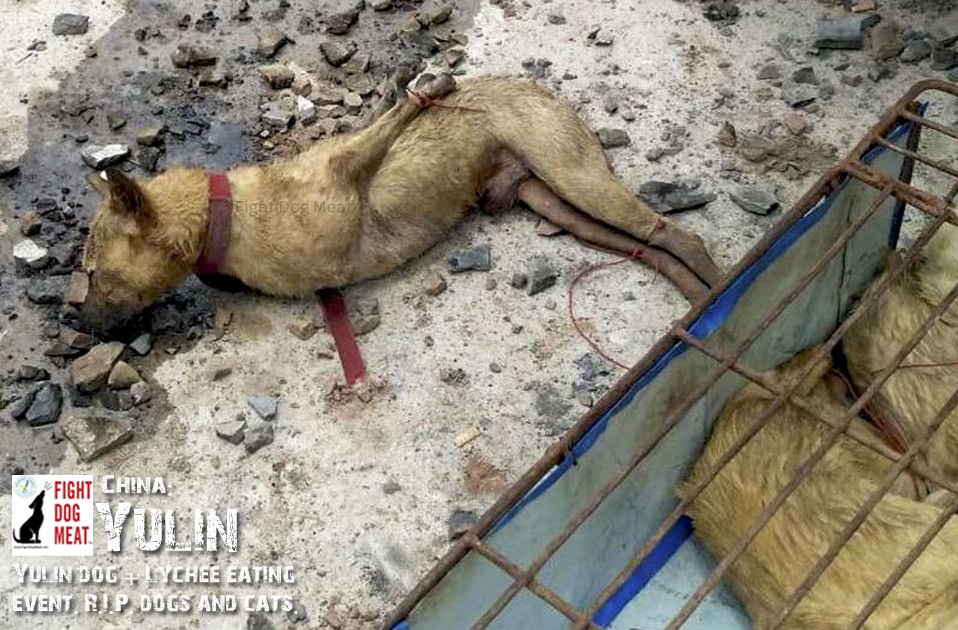 China’s annual dog eating and lychees festival starts today, June 21. Its a time for dog eaters in parts China to gorge themselves stupid on dog meat and lychees and wash it down with alcohol. Westerners call June 21 the longest day of the year. China’s lunar calendar runs the summer solstice period for 10 days. Its the hottest time of the year. In searing heat the dogs on trucks have no food or water for approximately five days. This is deliberate to ensure less body waste during the slaughter period.

Yulin City is located in Guangxi Province in southern China. Thousands of dogs are held in appalling dungeon cells ahead of the event then crammed into wire cages and loaded onto massive trucks. Some trucks hold around 1,200 dogs. Loaded dog trucks are moving death camps. Dogs suffer horrific injuries being crammed on top of each other in the cages. Limbs protruding through the cages are broken. The dogs are unable to move and many suffocate from being crushed. As panic sets in fights break out and dogs are ripped and torn, leaving them open to infection.

Notice in the main header photograph, taken at last year’s Yulin truck interception, the dog’s front legs were wrenched back behind him and trussed together. His hind legs were also tied tightly shut together. Almost every dog on the truck had been trussed and tied, then left for days in the hot sun, unable to shift their body weight at all. They suffocated, died of dehydration, disease and so on, crammed on top of each other. Horrific brutality!

Loaded dog trucks travel thousands of miles, dodging activists along the way. Drivers know back roads and often pay authorities for smooth pathways to their destinations. By the time a truck arrives many of the dogs are either dead or in the process of dying. All dogs will be used by butchers unless decomposition has already set in.

Surviving dogs suffer further injuries after the truck arrives at it’s destination. Cage are thrown off the truck from great height, smashing onto the concrete ground. Injured dogs are heard wailing in agony, still unable to move their twisted bodies locked inside the iron death cages. Dogs witness their cage mates die around them and they cannot escape the stench of death.

Dogs may survive the journey but no dog escapes the mental trauma of their journey. Its often pet dogs which were once loved who survive the truck journey. They are the ones who don’t die of disease along the way because they’d been vaccinated by previous loving owners. But its these pet dogs who suffer the worst mental trauma. The horrific betrayal by humans hits them harder. Pet dogs are either stolen or they have been sold to dog traders by owners who no longer want them and cash them in. 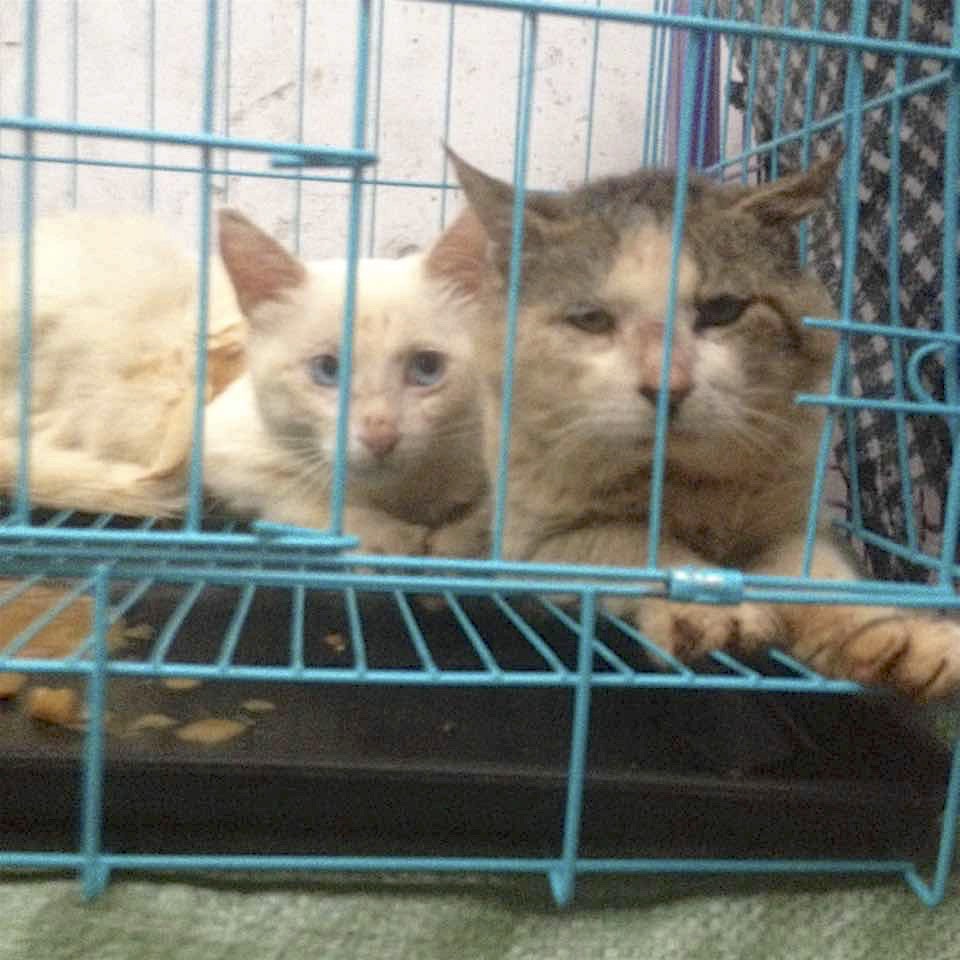 Yulin is mainly about dog meat and lychees but cats are also slaughtered and eaten.

Each year its unknown of trucks will be intercepted by Chinese volunteers. People do the best they can. Many animal rescuer expat foreigners living in these locations wait for notification if trucks have been intercepted. Its a difficult situation because by Chinese law trucks of dogs can now go into 21 days quarantine. Dogs do not have to be unloaded either, making it even worse for the dogs.

Thank You To Rescuers

A huge thank you to all animal rescuers working on the ground; especially during this time. People’s nerves are frayed and emotions run high. its a time of great sadness for animal lovers living in these locations. Just because dogs are intercepted and unloaded doesn’t mean things are safe at all. Gangs of dog traders are known to violently attack volunteers. tending unloaded dogs. To keep dogs safe they have to be quickly relocated to safe areas. This is difficult when dealing with massive numbers of sick and dying dogs.

Yulin Municipal Committee have found a way around the calls to ban the event. Yulin city cal the event the Lychee Dog Meat Festival a “local folk custom” which means it can continue doing business.

To avoid media glare its believed many dogs are slaughtered away from the public areas of Yulin festival. Butchered carcasses are brought into the event for vendors to sell. This is yet another way the city has found to continue the event despite condemnation.

Yulin is not the only dog meat festival.

Keeping quiet about things does not stop anything! Worldwide outrage is necessary for governments to take notice. We are pressuring governments by being a voice for these animals. Ultimately it is animal lovers living in these countries whom their own government will be forced to listen to, to enact positive change.

Fight Dog Meat will continue to bring you reports from dog and cat meat countries and the wonderful work their rescuers are doing, for their loved animals of all species!

Fight Dog Meat is a Registered Charity. We work with a number of animal rescue teams, including Bohe in northern China and the Haven Sanctuary out of Shanghai. If you would like to help the animals and rescuers we work with in dog and cat meat countries, please consider a small donation.