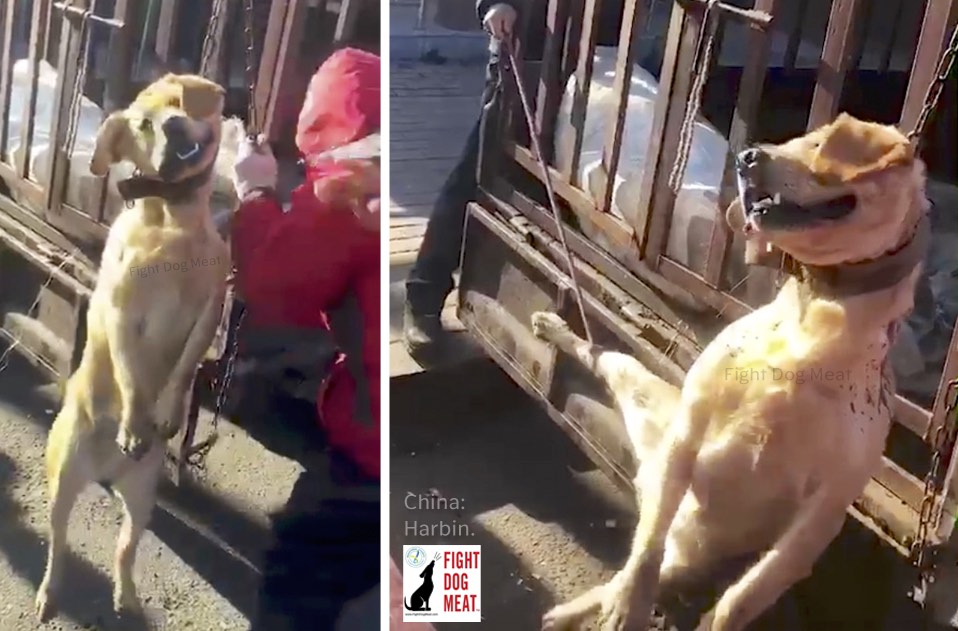 Harbin dog meat market today. Still alive the dog is hoisted off the ground by a chain around his neck. A butcher leaves the flailing dog hanging for a minute then stabs him in the side of his neck. Unable to scream out in pain or terror, the dog’s face twitches in terror as his own blood begins to gush out. The second butcher seizes one of the dog’s hind legs and ties a rope on it. He pulls the dog’s hind leg, stretching the dog’s body horizontally across the back of the truck. They’re about to start skinning the dog. The dog is still alive; his mouth opens and shuts, his tail flickers and his eyes open and close in slow blinks.

Local Harbin rescuers and animal lovers desperately want the world to see what is happening in Harbin, situated in northern China. Its time for foreigners around the world to look beyond Yulin when it comes to China. Harbin dog meat market is open for business every single month; month in, month out; year in, year out. Its 2019 and this level of accepted atrocity has to be exposed and stopped.

Video: viewer discretion advised and may be upsetting.

The dog in the following video is still alive.

Fight Dog Meat is posting this video to expose the depth of cruelty regularly perpetrated by the butchers in Harbin. Turning away or sitting quietly does not end the trade. We’re helping local rescuers have a louder voice on a world platform. Ultimately its the voice of China’s own people whom their government will eventually be forced to listen to, for positive change for animals. With your help and support Fight Dog Meat will continue to pressure governments from the sidelines. We will not be quiet and will not back down. Animal protection laws are needed!