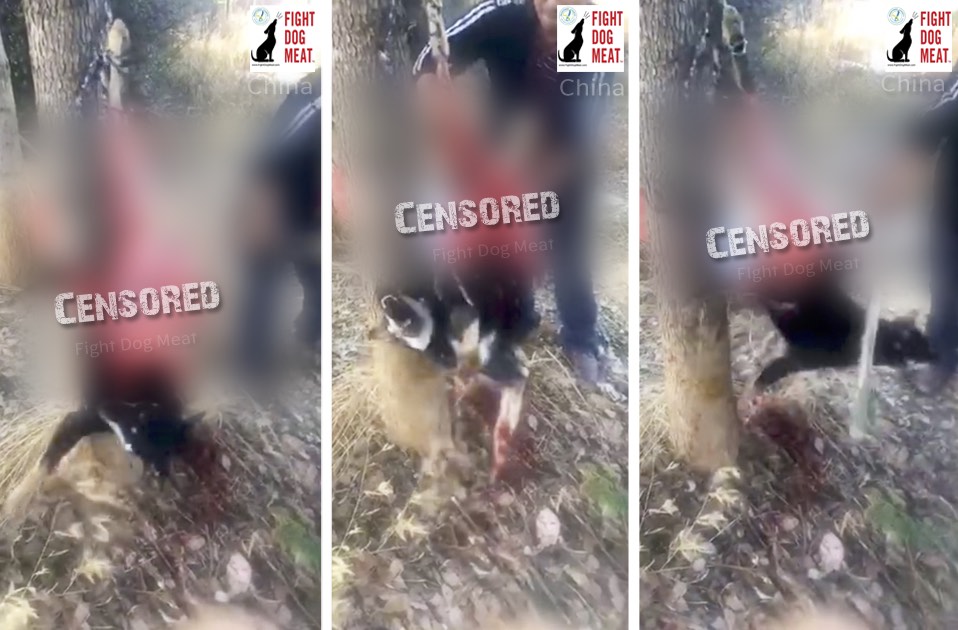 Flayed alive the dog is hung by one hind leg chained to a tree branch. Being flayed alive is a barbaric slow and painful torture where the skin is systematically removed from the live body. In China it is not illegal to flay an animal alive if you say you own the animal. There are no animal protection laws. The only information available about this barbaric video is that it took place in Hubei Province, China. The dog is wearing a house collar.

Flaying alive was considered the worst torture possible to inflict upon humans throughout history. The Assyrian army are the first to record flaying, back in 883-859 BC. Flaying was meted out by ancient Assyrians to rebel leaders.

In Chinese history flaying became popular in 1396 when the Hongwu Emperor ordered 5000 women to be flayed. Flaying humans continued throughout Chinese history. Lu Xun said the Ming Dynasty was begun and ended by flaying.

For humans and animals alike, causes of death due to flaying are shock, critical loss of blood or other body fluids, hypothermia or infection. The actual death is estimated to occur from a few hours to a few days after flaying.

It is astounding that in 2019 China allows known torture practices to be carried out without penalty! Chinese history shows Chinese leaders used flaying as a means of gross torture to inflict pain, suffering and terror. China is allowing this barbaric practice to take place against defenseless Chinese dogs. Animal lovers around the world should be outraged!

NOTE: THE DOG WAS ‘NOT’ RESCUED – a fake video is being circulated on Facebook and Instagram saying it’s rescued. That video contains years old footage from a fur farm of a poor fox who was professionally skinned. It is NOT the back dog in this article. They’ve joined images and videos together to play on people’s emotions! As if the story was not already bad enough.

Petitions Are Not The Answer

China is not interested in petitions. Not too long ago a petition containing 20 million signatures asking for animal protection laws was presented to the Chinese government. It was REJECTED and acceptance of the signatures refused.

In many years of fighting the dog and cat meat trade I’ve found that petitions do not hold any meaning to Communist governments such as China or Vietnam. If Fight Dog Meat thought petitions were the answer we’d be pushing our own petitions every day, [we have three petitions listed below.] Petitions are not the answer. Petitions help the person signing feel good for a moment. But they don’t influence governments who hold the power to bring change.

Fight Dog Meat will keep exposing what is taking place to these animals. Collectively we all have to keep yelling to let the governments know that we KNOW what is happening! Turning away or sitting quietly does not end the trade. We’re helping local rescuers have a louder voice on a world platform. Ultimately its the voice of China’s own people whom their government will eventually be forced to listen to, for positive change for animals. With your help and support Fight Dog Meat will continue to pressure governments from the sidelines. We will not be quiet and will not back down. Animal protection laws are needed!