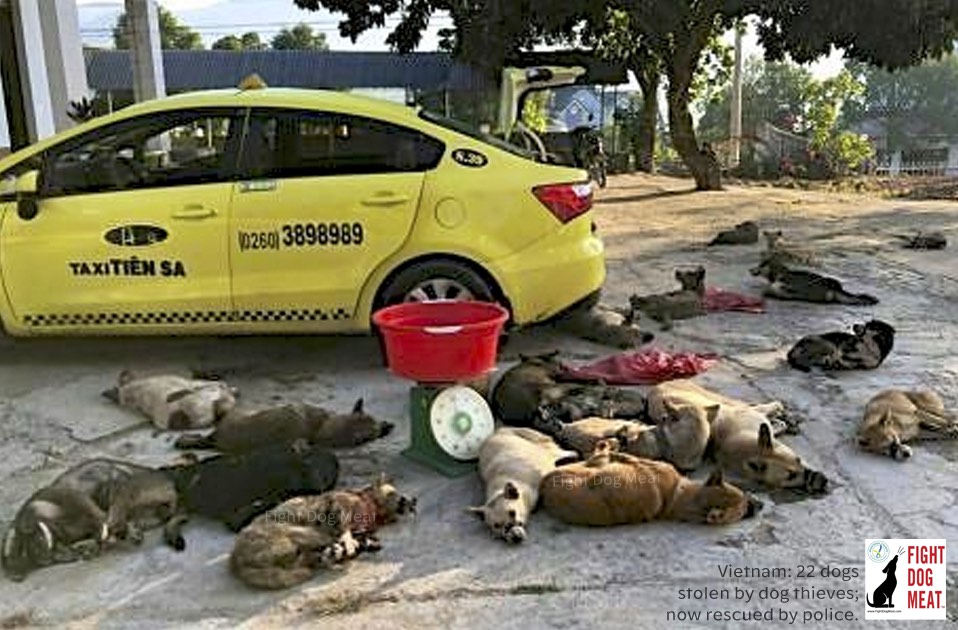 22 stolen dogs were rescued from dog thieves by Sa Thay District Police. They’re being investigated on stolen property charges and facing up to 15 years in prison. The dog thieves used a public taxi to secretly transport the dogs to slaughterhouses. One dog thief and the taxi driver were arrested and taken into custody. The other dog thief escaped on his motorbike. The arrested thief admitted to stealing three dogs from families, then buying an extra 19 stolen dogs for $430 usd from other dog thieves. The 22 dogs were all to be sold for dog meat.

Following a tip off from local residents, police from the Central Highlands province of Kon Tum intercepted the taxi and arrested dog thief Mai Ngoc Vien, age 33, and taxi driver Dao Van Thuy, age 54. Police are hunting down the escaped dog thief, a friend of Vien’s,

After police rescued the 22 dogs they were taken to safety. A vet was called in and the bindings were cut off each terrified dog. The dogs were terrified and some were seriously injured and fighting for their life.

Police released photographs of the 22 dogs and asked owners to come and claim their dogs back. Pet dog owners began contacting Sa Thay Police. Owners showed photos to the police of their pet dog on their phone and police watched to make sure the dogs recoginzed their owners. Dogs and owners were reunited. One female dog had a litter of starving baby puppies waiting for her. She was reunited with her owner and her puppies!

As soon as owners claimed the first dog Sa Thay Police upgraded charges against the two dog thieves. Vien and Thuy are being investigated by police for “stealing property”, which is a crime punishable by up to 15 years in prison in Vietnam. 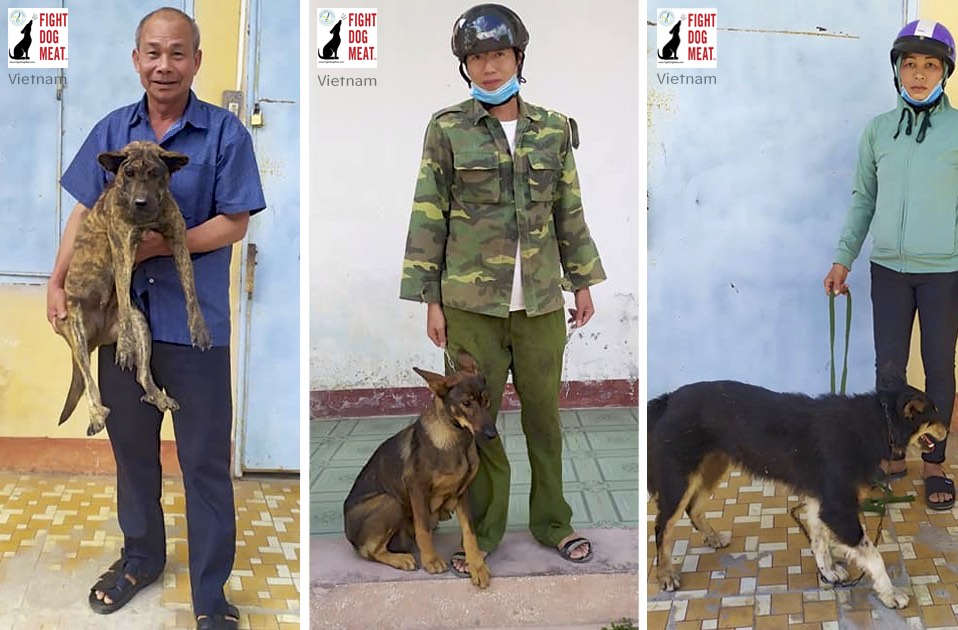 Vietnam: three of the 22 stolen dogs which were reclaimed by their owners. The middle dog was reunited with her litter of starving puppies.

Thank you to Sa Thay District Police for rescuing the dogs, getting them medical treatment and allowing their families to reclaim them.

Dog thieves know they’ll only receive s slap on the wrist if caught by police, unless owners come forward and claim their dogs back. Then it becomes theft of property – which is what happened in this case.

Unless dog owners can prove ownership or prove their dog is valued over $86 usd usually dog thieves only get a slap on the wrist and walk away to do it again. The only thing which strikes fear into dog thieves is being caught by an angry mob of local residents. However, having dog owners come forward with proof to reclaim their dogs creates a new fear in dog thieves: up to 15 years prison in a Vietnamese jail.

Per ratio per population Vietnam has the largest dog meat trade and the largest cat meat trade. There are no dog farms in Vietnam. Many dogs in Vietnam’s meat trade are stolen pets, still wearing house collars and name tags. [Header photo credited to Kom Tum police.]