Dog thieves were caught with 14 dogs which they’d stolen to sell for dog meat. At 2am police in Binh Duong province noticed two men in a car acting suspiciously in a car with fake number plates. Police gave chase as the dog thieves tried to escape. The thieves threw nails onto the road to try and puncture the police car’s tires. However, Binh Duong police are experienced against tricks used by dog thieves trying to escape.

Police successfully overtook the thieves, forcing their car to go off road into a ditch. One of the thieves jumped from the car and ran, but was caught and arrested as he tried to flee the scene. The other thief was also arrested. 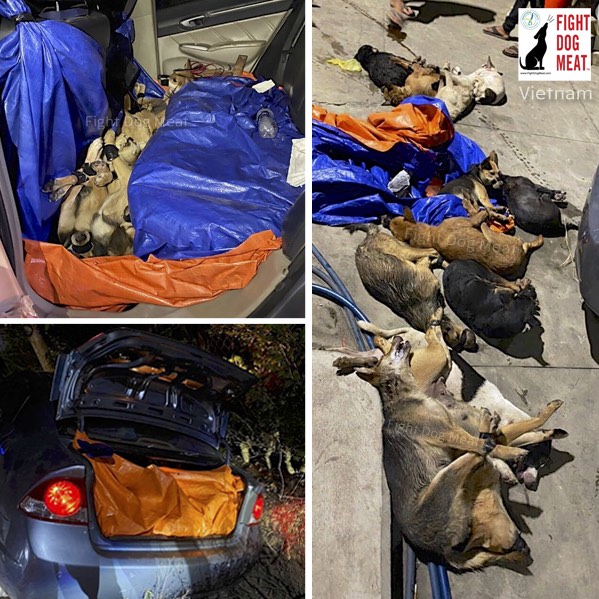 Searching the car police uncovered 14 dogs, with their mouth bound shut and their four legs bound together. Some dogs were alive and some had already suffocated to death. Police also uncovered six electric guns and multiple tools to steal, injure and kill dogs. Police also uncovered nails to puncture tires of anyone who would try and chase them, and chili powder to throw into people’s eyes if anyone tried to tackle them. 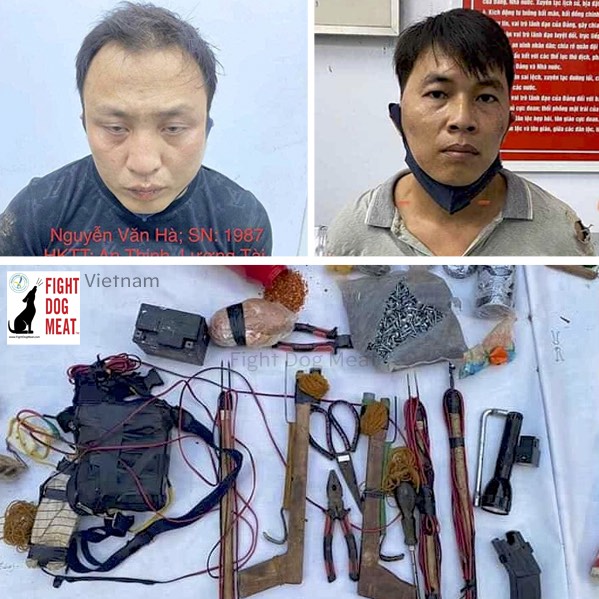 Vietnam: dog thieves and their tools used to catch, injure and kill dogs.

Police took the dogs to a safe location and untied the bindings from their face and legs. Each dog was weighed by police to calculate the total weight of the 14 dogs. The information will be used as evidence when the dog thieves are prosecuted in court.

Police are now inviting any owners who recognize their own dog among the photographs to please bring photo proof of their dog and collect their pet dog back.

The two dog thieves will be prosecuted to the full extent of the law. Thank you to Phu An Police in Binh Duong for their diligence in apprehending and arresting the dog thieves. Well done!