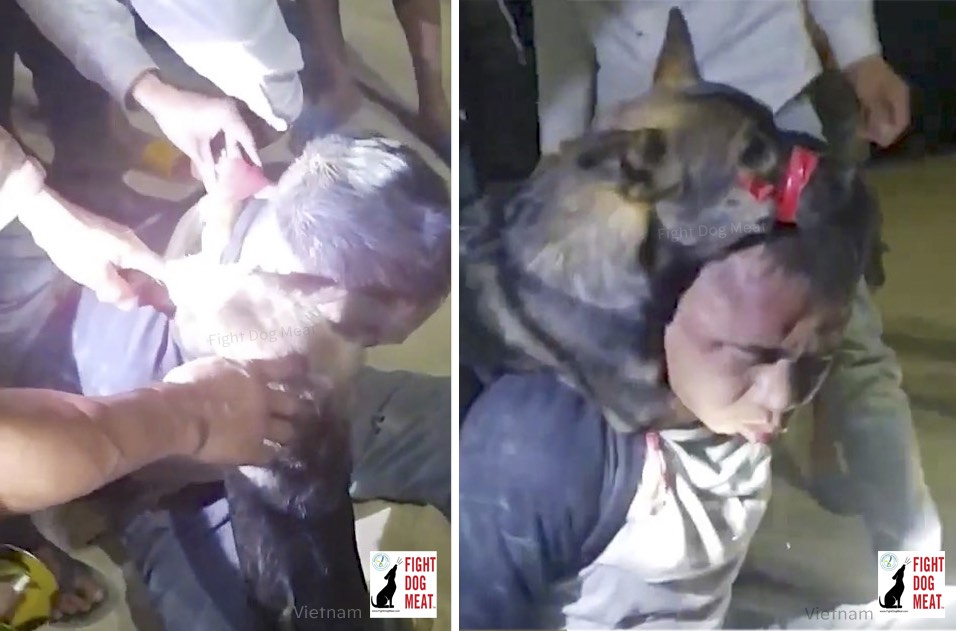 A dog thief caught by angry local residents had a stolen live dog with him. The thief had shot the dog with his home made electric gun, causing the dog to lose consciousness from being electrocuted. The thief bound the dog’s mouth tightly shut and took the dog on his motorbike. He was spotted by furious local residents who chased him down and over powered him. The dog regained consciousness as the thief was served local justice, Vietnamese style, in Lâm Đồng Province.

The dog is the victim of this crime. We do ‘not’ agree with the traumatized dog being used by angry residents to taunt the dog thief.

The dog has already suffered being electrocuted and having his mouth bound shut. No matter what the reason, the dog should ‘not’ have had his paws bound together to be draped over the dog thief as a spectacle! The trauma to the dog from residents was just as much as from the dog thief.

Police were called to the scene but stood back as the mob continued to taunt the dog thief. Police know the only thing which scares dog thieves is being caught by angry locals. Dog thieves know if they’re caught with local grass dogs (mutts), police can only give them a slap on the wrist. Provided the stolen dog is valued under $100 USD and the owner has no written paperwork providing proof of ownership and monetary value over $100 USD, dog thieves know they won’t be criminally charged with theft of property. In other words they can walk free with a small fine. Police need stronger laws to help them better govern criminal elements in society, such as dog thieves.

The dog is clearly alive in the video but we don’t know the full outcome.  We certainly hope the dog was quickly removed from the situation and the bindings removed from his muzzle. We hope he was reunited with his local owner and is now safe. We’ll watch to see if there’s future court proceedings concerning this dog thief, which is when police would usually release the full story.