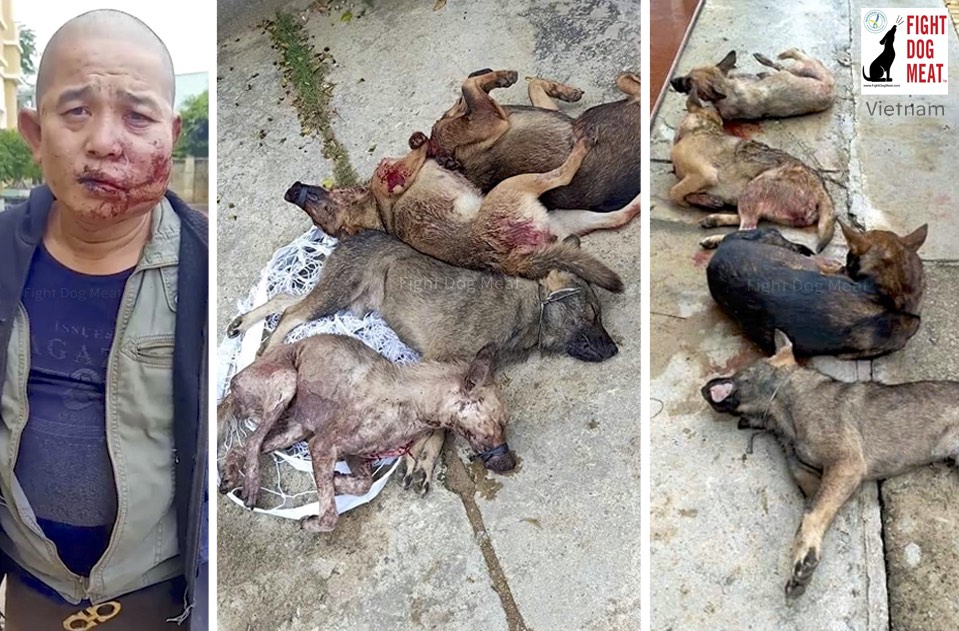 Brutally cruel dog thief stabbed the dogs in the chest with a long blade knife, after he’d already electrocuted them and bound their mouth tightly shut. What a coward bastard! At 4.30am this morning he was caught with eight dogs – some were still alive despite critical injuries inflicted upon them. He used a home made steel arrowhead electric gun to electrocute the dogs and knock them unconscious. This gives the dog thief time to bind the dog’s mouth tightly shut, leaving the dog completely defenseless against him. He then used a long blade knife to stab the dogs in the chest, leaving them thrashing and gurgling in their own blood as he stuffed them into tight plastic sacks, which he tied shut. 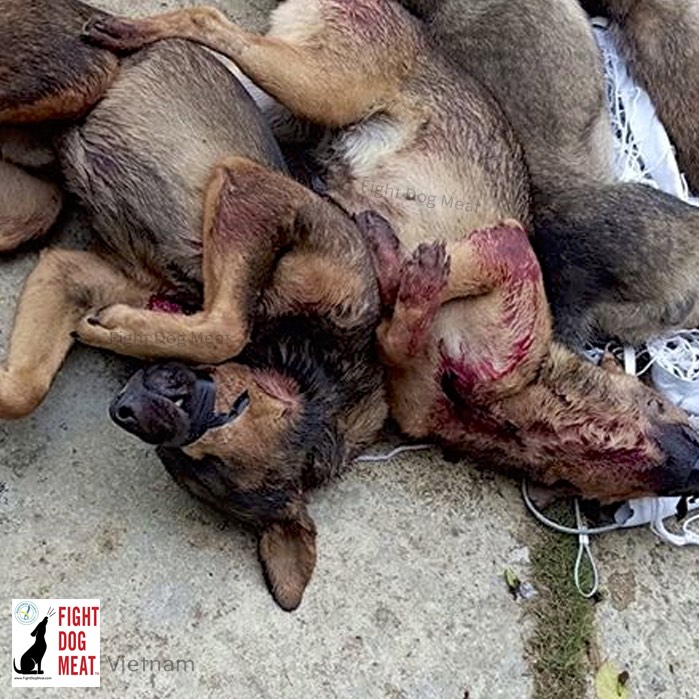 Stolen dogs with their mouth bound shut, then stabbed in the chest. Incredibly cruel.

3.45am two security guards on patrol noticed two persons acting suspiciously. It was the two dog thieves. Both dog thieves tried to escape and a full police chase broke out over 45 minutes. The police were from Dak Glei, Dak Lak District Police, in Kon Tum Province, central Vietnam.

The chase sped through back roads and weaved through alleys and short cuts. The dog thief who was captured crashed his motorbike and fell off, giving time for police to overpower and arrest him. Police say he injured his own face in the fall. Captured dog thief Bui Quang Hoang is 40 years old. He lives in Plei Kan Town, Ngoc Hoi district. 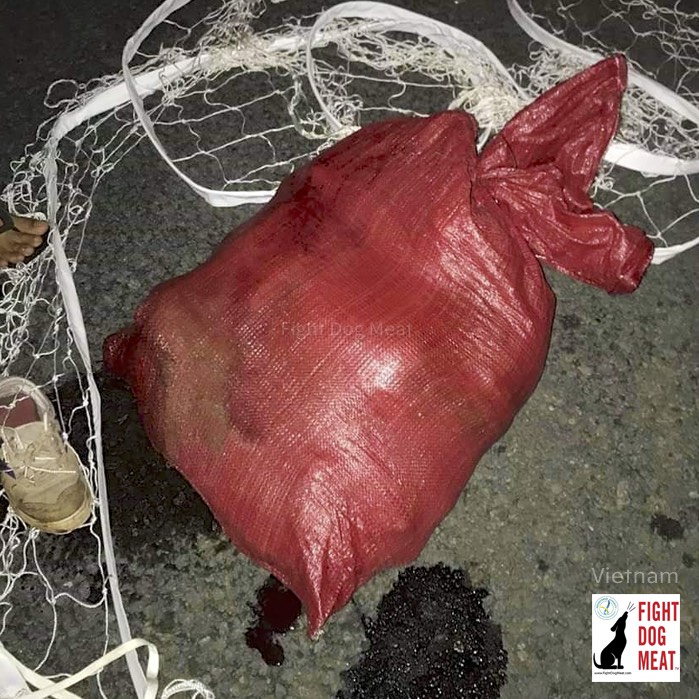 Stolen dogs stuffed into sacks, with their mouth bound shut and stabbed in the chest. Some of the dogs are still alive. 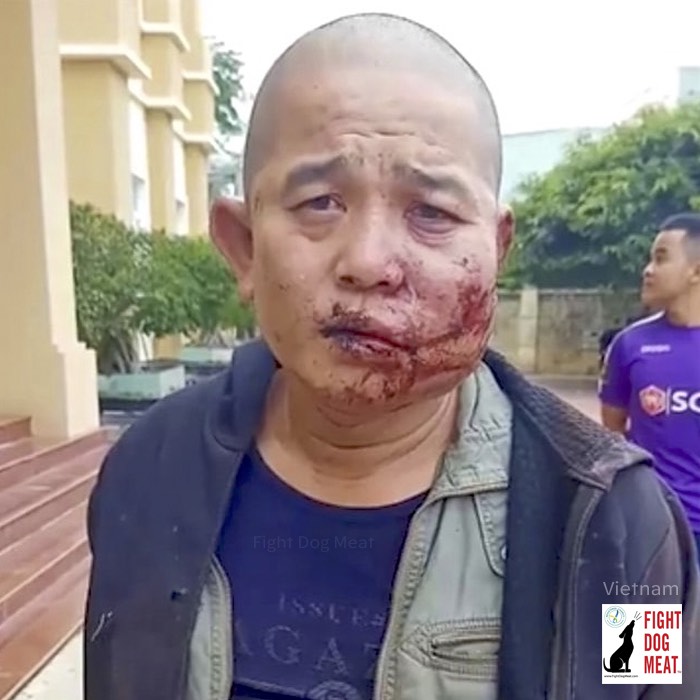 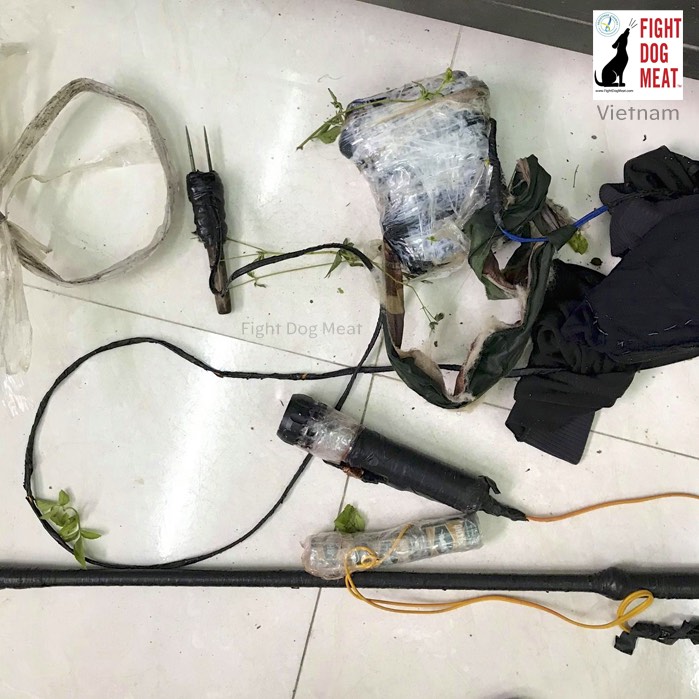 Dogs are shot with the steel arrow head electric gun to electrocute them and knock them out.

More detailed information on this case will be released to the public when police take the dog thief to court, to prosecute him.

Fight Dog Meat is a Registered Charity. We work with a number of animal rescue teams in dog and cat meat countries, including Vietnam and China. Due to Covid-19 flight cancellations Fight Dog Meat has a number of rescued meat dogs in hospital and in rehabilitation in Vietnam. Until international flights start up again we’re under great financial strain to maintain our rescued animals. FDM is still accepting critically injured meat dogs; if we don’t they will die! Many of our dogs have some of the worst injuries in the meat trade. Please consider helping us during this special time.