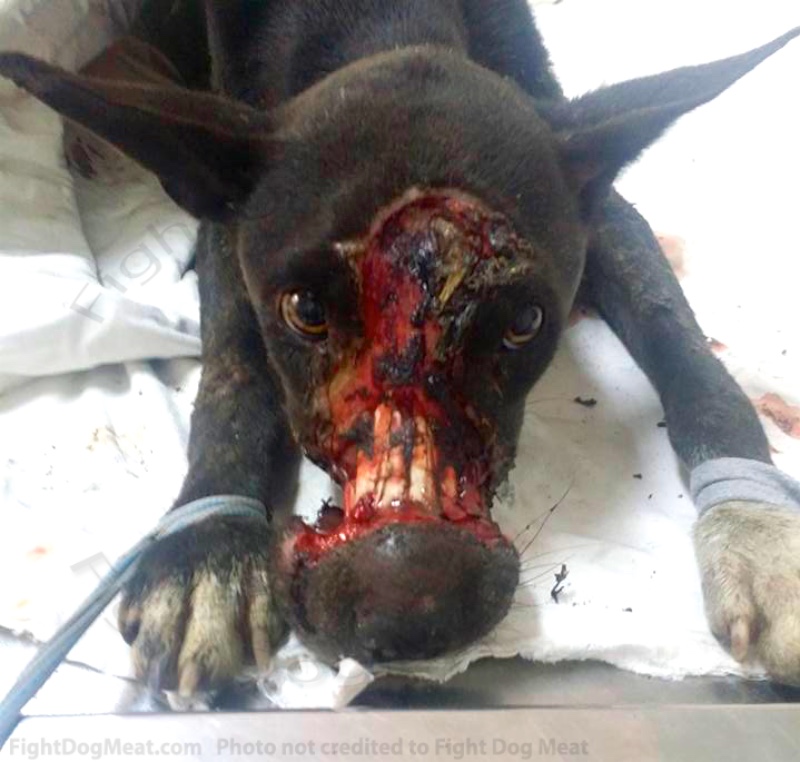 On New Years Eve a terrified black dog with her mouth bound tightly shut, who had escaped from a dog butcher, was finally captured after two weeks of dodging rescuers. Known as NewYear, the skin on the dog’s mouth had rotted and disintegrated.

Members of the Saigon Animal Rescue group knew it was a race against time as they immediately transported the terrified and critically injured dog to the Petpro Animal Clinic in Saigon, where she is still in treatment.

She has lost all the flesh and muscle from her mouth, upper and lower jaws, plus her face, up into her forehead. She was critically dehydrated and had numerous infections raging in her frail body. She had not eaten for at least two weeks and was reduced to a skeleton.

You can see the terror in her eyes. This dog had already escaped a dog butcher once so she probably thought she was about to be killed – she didn’t know she had been rescued. NewYear was a street dog, who has probably never known a kind word or a warm pat from a human being.

NewYear is petrified of humans, but the animal rescue group who rescued her are making sure she is receiving love and comfort. Vet’s fitted NewYear’s facial wound with medical gauze, to give it some protection. However, the gauze has to be changed very regularly to monitor infections. At this point she was still surprisingly bright and strong.

Yesterday, January 3, 2016
NewYear was making remarkable progress up until yesterday, when she took a grave turn for the worse. She quickly became weak and semi-unresponsive. Her rescuer’s were told to brace themselves and expect the worst, by the treating vet.

NewYear is battling infections and has been unable to eat since being rescued. It was unknown if she would even live through the night. But then another miracle seemed to take place.

The above and below photographs are from NewYear’s treatment this morning, which is remarkable because she was not expected to live though the night. Fight Dog Meat are in direct contact with NewYear’s rescuers and will continue to bring you her latest updates. She still in critical condition and has a long way to go before being considered stable.